El Gringo Loco: Why the Dudley Boyz are Neither the Best, nor Greatest Tag Team

Every so often, a topic gets on Twitter that needs to be addressed. And this is one of those times. You see, Mr. Tito is claiming that the Dudley Boyz are the greatest tag team of all time. Now to be fair, originally, he responded to a threat that said best tag team. When I saw him called the Dudleys the best, I thought he meant greatest, and I responded wit the Road Warriors. A few columns back, I explored the Road Warriors in my Animal tribute and that strengthen my stance of them being the GOAT team. But when I saw best tag team, well let’s just say the Dudley’s are further up the all time list there. But now I see Tito doubling down, calling the Dudley’s the GOAT team, and that’s were I draw the line.

There is a difference between best and greatest. Rarely are the two the same, but when they are, it’s magical. The best baseball player of all time is Willie Mayes, he did things no other player could do in his era. The greatest baseball player of all time is Babe Ruth, his impact on baseball can never be topped. But in basketball Michael Jordan easily falls as not only the greatest player of all time, but the best. In wrestling, well I honestly don’t know who the GOAT (Greatest of all Time) is. I can hear an argument with any of about 10 guys, and I will believe it. With that said, I don’t feel the same way about tag teams. I can honestly say I have a GOAT list and a best list, and there is a number 1 for both. And neither team is the Dudley Boyz.

Difference Between Best, and Greatest

First, let’s break down some key words here, Greatest, and Best. I use them differently. Many confuse them but there is an easy way to break them down. If you are talking best, you are talking about technical skill. Now, how you measure technical skill is subjective to each individual, but I can tell you with certainty that I do not have the Dudley’s in the top 10 of my best tag teams list. Even when counting mic skills and promos, the Dudley’s aren’t there. I do have teams like the Horsemen (which are my number 1 best team), Tully and Arn, Midnight Express, and Edge and Christian on my top 10 list of best teams. As a wrestling history (whatever that means), I also have the Briscoe Brothers, the Funks, Rock and Roll Express and yes, Demolition, as better tag teams than the Dudley’s.

Now don’t get me wrong, the Dudley’s were good. But there is a difference between being good and being on the best teams list. The Dudley’s were great brawlers, maybe the best brawling tag team ever, and they were masters of the gimmick match. But if you look at tag team wrestling, you have the Rock and Roll Express who basically wrote the book. From the heel prospective the Horsemen were so crisp in the ring, that it’s hard to put another team over them as the best. Maybe people will point to their classic matches, but I ask, how many of those classics were regular one fall matches? Exactly.

Who is the Greatest Then?

Aw yes, if you are looking at greatest, I do have the Dudley’s on my list. But what is greatness? Well it’s simple, greatness are the teams that have the most impact in wrestling. The Dudley’s not only pioneered hardcore wrestling, they perfected hardcore tag team wrestling. From ECW, to WWF and their TLC matches, the Dudley’s helped create a genre of wrestling that’s still felt today. While I’d put the Hardy’s or Edge and Christian as a better tag team than them, the Dudley’s made their impact felt in a broader level. They were a main draw in ECW, causing riots and having classic matches. People wanted to see the Dudley’s. If you are looking at the Dudley’s ECW run, you could easily argue they were the greatest team in the late 90’s.

With that said, as I covered in the Animal tribute, the Road Warriors were revolutionary. The Road Warriors held up a dying AWA, they headlined Jim Crockett cards across the south, and headlined WWF house shows around the nation. Then they later headlined cards across Japan and around the world. Were the Dudley’s did headline ECW cards, they were limited once they went to WWF. The Road Warriors were able to translate no matter their environment, the Dudley’s on the other hand were not the riot inducing team once they weren’t able to curse at the audience. So were the Dudley’s greatness did allow them to move from place to place, they were limited when they didn’t have ECW freedoms.

Drawing in wrestling is a very tricky thing. You have two teams who were the top tag teams in the two highest drawing eras in history. But both had greatly different roles on their cards. Whereas the Road Warriors being headliners for many of wrestlings greatest moments, the Dudley’s were on the card looking to steal the show. So, the question becomes, who is more important, the Show Stealer, or the Show Stopper. This question has been the topic of debates for decades. Was Steamboat/Savage a greater match than Hogan/Andre?

Well I come from the prospective that wrestling is about drawing. I don’t care how many stars Uncle Dave throws at you, if those stars don’t translate to business, it isn’t great. Okada vs. Omega, their matches were so great people from around the world turned in to see it again, so those stars drew money. Rock and Rock vs. Midnight, those matches drew money. With that said, both Road Warriors and Dudleys each had above 4 star matches, but one of them had them at the top of the card.

The Art of Money

When the idea of predetermined matches started, it was to get people coming back, to draw interest. Wrestlers would agree to exchange matches in order to get interest in a third, or forth match. If wrestling was about “art,” or “wrestling,” then you wouldn’t have promos, you wouldn’t have “angles,” or rubber matches. The true art of wrestling is the draw. Sometimes you can’t measure that. For some reason, The Rock had something that connected with the audience, drawing millions of people to their TV. Well Triple H at the time, might have been the better wrestler, The Rock was the draw. And the draw is the most important thing. 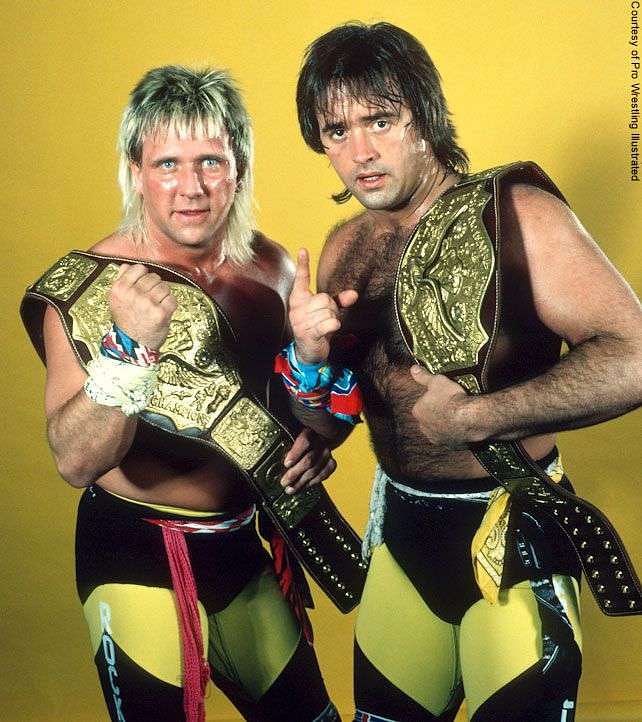 I’ll make this short, and brief. The Rock and Roll Express is the best tag team of the post-WrestleMania Era. I will accept many other answers, including the Horsemen. But the more I type this, the more I realize, the Rock and Roll wrote the book on tag team wrestling. It is much harder to get over as a babyface tag team, than get heat as a heel team. Other than the Road Warriors, the babyface tag team needs sell their asses off. Ricky Morton sold his ass off in each match. If you want to look at how to do tag team wrestling text book perfect, then you have the Rock and Roll Express. 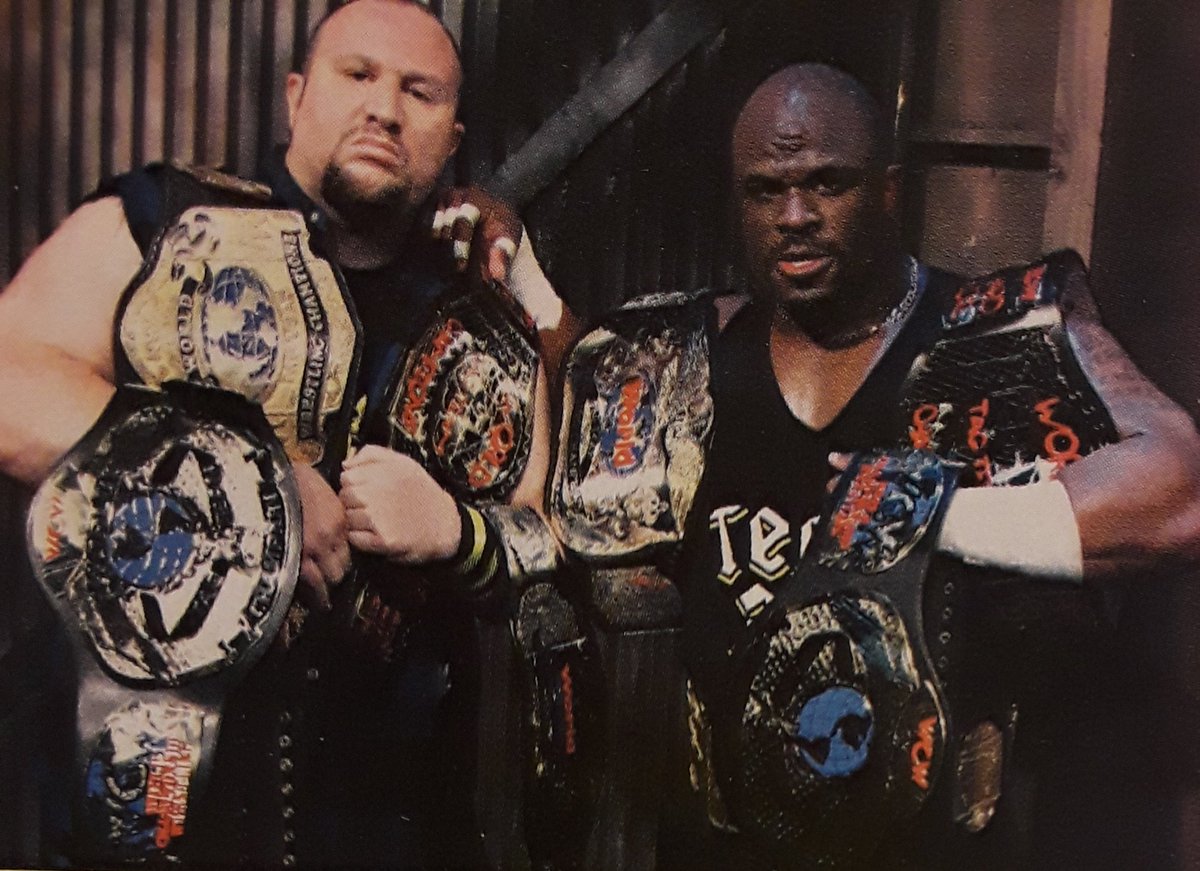 Where do the Dudley’s Land?

This question is very easy, I think I spent too much time downing the Dudley’s, without putting them into prospective. The Dudley’s are the second greatest tag team of all time. Were their better tag teams, yes. But when looking at great tag teams, the list is really, really short on who is on the Dudley’s level. Aside from the Road Warriors, you can’t name a team with the amount of impact as the Dudley’s. The Road Warriors are it. The Road Warriors spawned a whole genre of tag teams, like the Powers of Pain, Demolition, the Master Blasters, Skyscrappers. The Dudley’s on the other hand spawned their own movement, taming hardcore wrestling. From ECW, to WWF the Attitude Era, to TNA, the Dudley’s took a form of wrestling with no focus and molded it to their image. They created something that everyone else wanted.

I could say so many other teams are in the top 5 of all time, I think you’ll hear that a lot from Bruce Prichard. But the reality is that the top 5 is really a top 2. Number 3 might be the Fabulous Kangaroos. (If you don’t know who that is, don’t worry. I’ve seen the tapes; you are not missing much.) Maybe you have a different opinion. Maybe you agree with the guy at the other site. Either way, that’s your opinion and you are entitled to it. The great thing about wrestling is matches are predetermined, greatness is judged differently. There are no true stats like most

Seth Rollins and Becky Lynch Welcome Their First Child Together

Viewership Up for Total Bellas and Miz & Mrs. Episodes