by Marc Middleton
in ROH News and Rumors
A A
8

Former ROH booker Gabe Sapolsky took to Twitter this week and apologized for the in-character commentary that he did on ROH TV several years back during the early days of the promotion.

The tweets were deleted not long after they were posted, but you can see screenshots of the posts below.

Sapolsky explained that this was a different era, one where it was hard to find “decent commentators” who would work the long hours to produce episodes, and he was trying to save former ROH owner Cary Silkin money. He admitted that his commentary ranged from “bad to embarrassing to deplorable” and he apologized for anyone that has to hear it when watching the ROH library now.

Sapolsky also called on people to ask new ROH owner Tony Khan if he can edit out some of his commentary, if possible. He added that he hopes his commentary doesn’t ruin anyone’s enjoyment of the classic ROH content.

“Since I see classic Ring Of Honor is getting more attention I want to take a moment and apologize for my ‘in character’ commentary,” Gabe wrote. “I’ll start by saying I fired myself from commentary as soon as we found a suitable replacement. It was another era back then. It might be hard to believe but it was hard to find decent commentators who would work the hours we did. We used to do commentary on 2 shows staying up all night on a weeknight in Tampa, FL. Budget was also a concern & I wanted to save Cary $

“At the time, ROH was just a growing indie. It’s not like people were clamoring to stay up till 5am to do voiceovers in a living room in Tampa. We went through various commentators and eventually I didn’t cost any extra money as I was there anyway to edit/produce. I also knew the storylines, directions & characters. Thankfully, we eventually found Lenny Leonard, who lived in the area, and Dave Prazak. We booked Prazak in FIP and combined the expenses to fly him in. They were a great team & still are. They gave us stability.

“My commentary skills ranged from bad to embarrassing to deplorable. There were times I tried to do a Howard Stern influenced character (big in the early 2000s) & had an ECW influence. I apologize for anyone having to hear it now. As you can see from years of EVOLVE, my values and standards changed to being much more family friendly without trying to be ‘edgy’ in a 90s style. Can someone please ask Tony Khan to see if he can edit out my commentary or at least the worst parts of it. I’m not sure if that’s possible. Maybe he has the original master tapes. I don’t know. I hope my commentary doesn’t ruin people’s enjoyment of classic ROH. Thank you”

Gabe added in a follow-up tweet, “For the record, I don’t know Tony Khan and have never talked to him. However, I know a lot of people who do know him so feel free to pass on the message :)”

Sapolsky has had numerous key roles in pro wrestling over the years. He worked as Paul Heyman’s personal assistant in the original ECW, the co-founder and head booker at ROH, the Vice President of Dragon Gate USA, creative/Talent Relations and marketing roles with WWN, and he was the founder and booker of EVOLVE. WWE hired Sapolsky in January 2018 to work as a consultant. He mainly worked the WWE NXT brand until being released on January 6 of this year.

You can see screenshots of Sapolsky’s deleted tweets below: 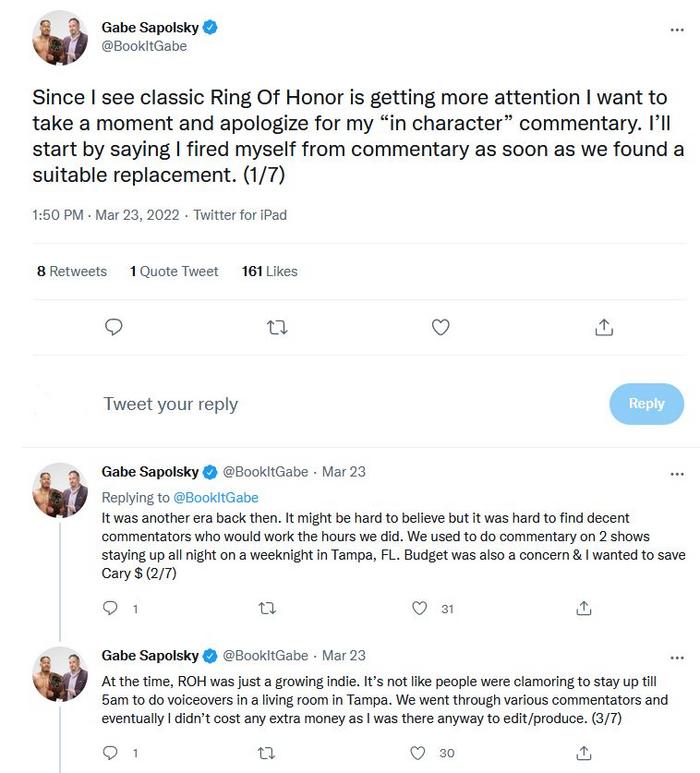 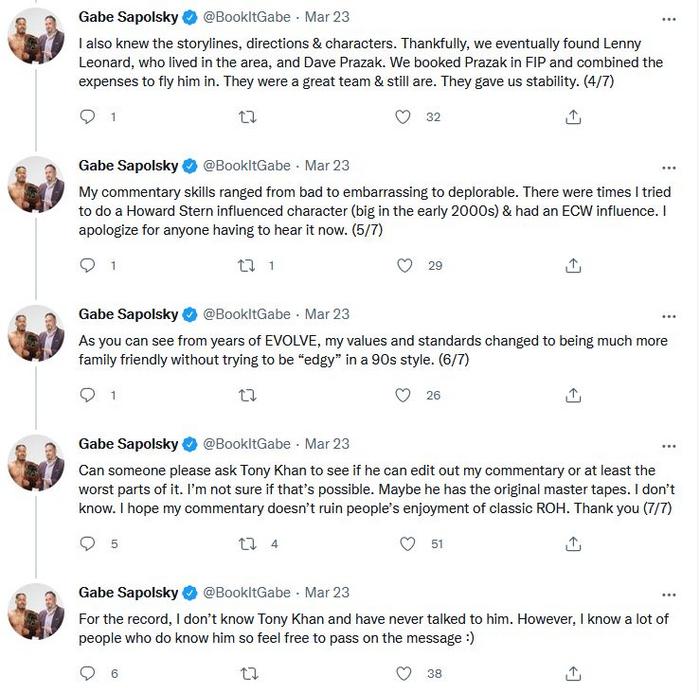 Will Ospreay Pulls Out Of RevPro Show Due To Kidney Infection

Montez Ford on Making It to WrestleMania, What He Told Himself After Bianca Belair vs. Sasha Banks, More