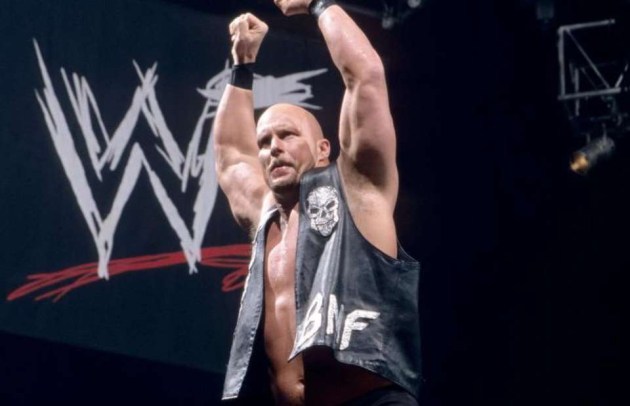 What can be said about Stone Cold Steve Austin that hasn’t been said a million times before? Bad timing, politics, and injury conspired to make sure he only spent a few years at the top of the mountain, but his indomitable energy, ground breaking attitude, and worldwide popularity made his time in the spotlight one of the most successful eras in the history of the industry.

I’m not sure I’m really the right person to be writing this induction. By the time I started watching, Austin’s wrestling days were already behind him, and all I saw was the seemingly endless Stunner parade that was his stint as Raw Co-GM and, more hilariously, “The Sheriff of Raw”. Remember his little badge? Probably not as well as you remember his little ATV. MarioKart 3:16 lives on!

But even in the twilight of his career I knew he was something special, and it took me no time at all to dive into the history books (or, in modern terms, Youtube) and discover the greatness that was Stone Cold Steve Austin.

Even when he was only “Stunning” Steve, back in WCW, it was easy to tell that Austin had something special that could be a huge deal in the end. Too bad for Eric Bischoff that he couldn’t figure that out. I wonder if he still kicks himself every time he thinks about feeding Austin to a guy like Jim Duggan, just to placate the ego of Hulk Hogan? But that’s neither here nor there. Austin was able to distinguish himself as a solo act, as part of the Dangerous Alliance, and especially alongside longtime friend Brian Pillman as part of the Hollywood Blondes. His potential continued to reveal itself as he briefly took to ECW and let loose what many consider amongst the greatest promos of all time, mocking Hogan and WCW and indirectly birthing the character that would eventually reshape the course of the WWF forever.

But it was only once he reached the WWF that he was able to rise to the very top of the industry. Overcoming lame gimmicks such as “The Ringmaster”, Austin’s personality shone through and began to catch the interest of a wrestling audience primarily interested in WCW and the nWo. The WWF, desperate for anything to turn their losing battle around, decided to give him the ball.

And my god, did he run with it. From his legendary feuds with Vince McMahon, the Rock, Triple H, and many others, to his captivating promo skills and amazing brawling prowess, everything that has come after Austin has been influenced by and held up to the high standard that he set. To be an inaugural member of the LOP Hall of Fame is just one of the many, many awards this man is due for his incomparable contributions to the business.

The most interesting thing about Austin to me is the fact that it feels like WWF would never have let him be “the guy” if they hadn’t been pushed right to the brink by the WCW onslaught. Austin didn’t fit the WWF mold in the slightest. He wasn’t a company man, he wasn’t a herculean strong man, and he certainly didn’t appeal to the family friendly demographic as Vince has tried so hard to do for most of his tenure as head of the company. He was a foul mouthed and foul tempered WCW reject, not especially big or strong, and almost the very moment WCW went out of business the WWF launched him into an ill-advised heel turn that his character never fully recovered from. The moment WWF was safe to take the ball away from him they did so, and as injuries, poor booking decisions, and general burnout caught up to him he eventually faded from the spotlight.

But my god, what a run he had at the top.

Retroactive or not, I love Steve Austin because he overcame the odds the way no other wrestler ever has before or since. Instead of being changed by the WWF, he made the WWF change for him, and the result was one of the most profitable booms in the history of the company.

There are so many amazing moments associated with Austin it’s almost impossible to know where to begin. Here are just a few of Austin’s iconic contributions to professional wrestling:

-The “Austin 3:16” speech after his King of the Ring victory in 1996, which launched his meteoric rise to the top and helped make Austin the top merchandise mover of all time.

-The infamous “Pillman’s Got A Gun” angle, which saw Austin break into his former friend Brian Pillman’s home only for Pillman to come after him with a gun, spouting obscenities on live TV no less.

-The incident at Summerslam ’97, which saw Austin’s neck broken in a botched piledriver spot. The truly amazing part is that Austin was able to roll up his opponent still and win the match, shattered spine and all! A true testament to Austin’s grit and determination.

-Austin’s historic confrontation with the “Baddest Man On The Planet” and boxing megastar Mike Tyson. The sight of Austin’s giving the world famous badass a shove and then being separated by hordes of security guards remains one of the most replayed moments of the Attitude Era.

-The changing of the guard at Wrestlemania XIV, credited by many as the “official” beginning of the much vaunted Attitude Era. HBK’s injured back would keep him from delivering his usual all time classic, but the image of Mike Tyson covering HBK’s fallen body with an Austin 3:16 shirt still shines brightly in the minds of the fans.

-The famous “Beer Bath” segment is right up there with Foley’s death defying fall from the top of the Cell in terms of being a definitive image of the Attitude Era. Only six days before Wrestlemania XV, Austin struck the final blow against McMahon’s Corporation and blasted the group with a beer hose. The image of Vince McMahon attempting to swim through the spray remains one of the funniest things I’ve ever seen in wrestling.

-And you can’t talk about Austin without talking about his historic Wrestlemania trilogy with the Rock. At XV, X-Seven, and XIX the two would collide in matches of epic proportions, with their second bout often mentioned amongst the greatest ‘Mania main events of all time. The chemistry between these two legends was extraordinary, and all three matches are well worth a watch if you’ve never seen any before.

And that’s barely touching his amazing in ring contributions over the years. From his invaluable participation in multi-man classics such as the ’92 War Games match, the Armageddon Hell in a Cell Match, or the finale of the Invasion storyline at Survivor Series ’01 , to his incredible battles with Bret Hart (’96-’97), Mick Foley (’98), Triple H (’99-’01), and Kurt Angle (’01), it’s easy to see why Austin was so beloved by marks and smarks alike for his groundbreaking work.

I don’t want to go on too long here, but I want to share my three personal favorite moments of the Texas Rattlesnake’s career.

Many call this the greatest feud in wrestling history, and it’s honestly hard to argue with them. There are countless classic moments in this feud, from the very first stunner in September of 1997, to Austin’s holding McMahon hostage with a fake firearm, and even all the way to the time Austin stunned every member of the McMahon family at “WWE Homecoming” in 2005. But for me, the best moment of the Austin/McMahon feud came shortly after Wrestlemania XIV. McMahon proclaimed that Austin had agreed to play ball and be a good corporate champion, and Austin would then appear in a suit and tie and pose with McMahon, smiling and cheerful. All seemed well until, much to McMahon’s dismay, Austin proclaimed he would never be seen like that again, stripped off his suit, and laid into McMahon with a passion. It’s one of many great moments in a great feud, and it has always been a personal favorite for me.

Austin was easily the most popular act of 1998, but Foley’s “Mankind” persona was also gaining quite a bit of popularity as fans learned the inspiring story of Foley’s life and rise to stardom. It was finally Foley’s night when he was given a shot against the Rock for the WWF Championship, but all of McMahon’s power was bent on ensuring he wouldn’t walk away with the title. In front of a red hot crowd it seemed like Vince would once again get his way; that is, until the sound of breaking glass sounded throughout the arena. The crowd went supernova at that moment, and Austin would march down to the ring and give the WWF a moment that would smash WCW in the ratings and be remember forever.

But my all-time favorite moment with Stone Cold Steve Austin came during a match that I personally consider the best of all time, the No Holds Barred Submission Match with Bret Hart at the otherwise panned Wrestlemania 13. A pre-neck injury Austin was able to match Bret hold for hold, and the storyline behind the match was purely excellent. The old school vs. the new, the passing of the torch, the brilliantly executed double turn, everything came together to make this match inarguably one of the most memorable of all time. Perhaps most iconic of all is the image of Austin, blood pouring down his face, refusing to give in to the Sharpshooter. His gritty refusal to give up or back down even in the face of crippling pain endeared him to the fans forever from that moment on, and the fighting spirit he showed in that match was reflected in the entire WWF product for years to come.

When Steve Austin was inducted to the WWE Hall of Fame, Vince McMahon called him the greatest superstar of all time, and it’s good to see that Lords of Pain agrees. I can’t think of anyone more deserving of this honor than the amazing, ground breaking performer known as Stone Cold Steve Austin.