As a proud member of LordsofPain.net since October 1998, it is my absolute honor to induct “The Nature Boy” Ric Flair into the LordsofPain.net Pro Wrestler Hall of Fame for the first year of inductions. You, the LoP readers, have spoken and I hope to be the voice of many who believe that Ric Flair is one of the greatest pro wrestlers of all time. 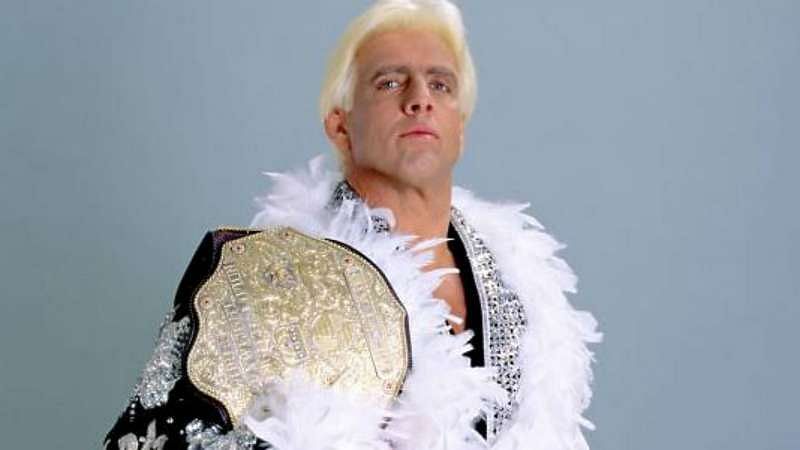 * In-ring career that spanned from 1972 through 2011, spanning across AWA, NWA/WCW, and WWE promotions while traveling internationally.

Those are simple facts in black and white that can be easily looked up. But what made Ric Flair great was that he performed 2 things like no other pro wrestler: (1) overcame adversity of bad booking, poor management, and legitimate ageism and (2) injected psychology into pro wrestling to make the fans believe that other wrestlers were great.

Ric Flair was born on February 25th, 1949 and by the time he debuted in the wrestling business during December 1972, he was already 27 years old.

Many wrestling fans might not realize how long Ric Flair has actually been in the wrestling business. Flair debuted during December 1972 and yet most people know him for his famous year, 1989, in a year where Flair was 40 years old. As Flair was pushing 40 during the late 1980’s as Hulk Hogan took the World Wrestling Federation (WWF) to new heights, Ric Flair had to deal with newly installed WCW executives put in place by the new owner, Ted Turner. They were gushing over the success of babyface Hulk Hogan and WCW management lusted over having a very successful babyface of their own. Thus, booker Dusty Rhodes pushing himself hard as a babyface and then pushed the younger Lex Luger hard during both 1988 and 1991 to become NWA/WCW’s own muscle bound babyface champion. WCW was glad to have Ric Flair put over Sting to become NWA/WCW Champion at Great American Bash 1990 so that WCW could push Sting hard and begin to demote Ric Flair down the card.

Granted, the age of 40 is a time of significant physical downfall for most wrestlers. But Ric Flair actually improved with age. Ted Turner, owner of WCW, installed non-wrestling guys as “executives” to run WCW and use various marketing advice for WCW’s creative team. One such executive, Jim Herd who oversaw WCW from 1988-1992, wanted to change up Flair’s look by shaving his head, adding an earing, and rename him from “Nature Boy” to “Sparticus” to modernize Flair. In addition to the new look, WCW management wanted to permanently remove Flair from the Main Event and force him to take a pay cut. This is despite Ric Flair giving the NWA/WCW arguably the greatest heel of all time and the guy who has consistently packed houses for NWA/WCW. WCW executives might have wanted someone like Hogan, but they had the close equivalent in heel form on their roster already.

To the second point, Ric Flair may be the best at in-ring psychology that the business has ever seen. Not just on selling moves, as Ric Flair sold injuries, manufactured in-ring drama, and worked on a body part like no other. But giving fans the BELIEF that any opponent could defeat him at any given time. For example, fans tuning into the first Clash of the Champions during March 1988 saw Ric Flair defending his NWA/WCW Title against Sting, less than 1 year into his NWA/WCW career through that time. Flair wrestled him to a 45 minute draw and the fans legitimately believed that Sting would become World Champion on that night. Flair did that with every opponent, even if it was a jobber match on WCW Saturday Night or Worldwide. Flair sold their moves, begged for mercy like a **** heel, and always won in dramatic fashion as if he were escaping the jaws of defeat.

Flair kicked it into extra gear for the big events. The best thing about Starrcade, Great American Bash, or other classic NWA/WCW super events was that Flair delivered in the main event. Always. Flair made Starrcade into NWA/WCW’s major event, as he fought for the NWA World Title for 6 consecutive Starrcades from 1983-1988. No matter who was the opponent, Flair delivered on the huge events. And then came 1989… After defeating the hard push of Lex Luger to become NWA/WCW’s cheap man’s Hulk Hogan, the creative staff (Dusty Rhodes) was removed and Ric Flair actually became booker for 1989. In the past, NWA/WCW had Starrcade to mostly look forward to as the big event and later Great American Bash. But with Flair as booker in 1989, every major televised show matter.

1989 was Ric Flair’s masterpiece. Ricky “the Dragon” Steamboat was let go by the WWE during 1988 after Steamboat requested a lighter schedule. WWE’s loss was Ric Flair’s gain. Flair brought back his old NWA Mid-Atlantic opponent, as they battled over the U.S. Title during Flair’s midcard years during the late 1970’s, and made Steamboat into a star again. Flair was terrified of Ricky Steamboat and helped to make 2 non-Great American Bash/Starrcade Pay Per View events highly successful in Chi-Town Rumble 1989 and WrestleWar 1989 which became must see events. Steamboat’s legacy has been greatly enhanced because of this Flair feud and the WWE continues to place their 1989 bouts on WWE videos, possibly moreso than 1989 WWF material and that was with the Mega Powers colliding! Ric Flair would bring back a turning 45 year old Terry Funk as the next opponent and their matches are legendary. In particular, the “I Quit” match at Clash of the Champions between Flair and Funk is often debated against any of the Flair/Steamboat matches for “Match of the Year” from 1989. While Flair enjoyed success in the main event, he was building Sting in the midcard and preparing him for 1990 to become champion.

WCW management began their own personal attacks of Flair during 1990 when they demoted Flair and kept him away from the World Title. Jim Herd’s new creative team created a fictional Black Scorpion character to feud with Sting instead. After failing to recruit someone outside of NWA/WCW for the Black Scorpion role, WCW management had to rely on Ric Flair to be the main culprit for Starrcade 1990. However, Flair fell out of favor with WCW management after they repeatedly tried to push Lex Luger over Flair as champion, a repeat of 1988. Ric Flair fought WCW management tooth and nail and was eventually fired just weeks before defending the WCW Title at Great American Bash 1991. Unemployed, Ric Flair reached out to Vince McMahon for a possible run in the WWE.

Flair’s run in the WWE helped fully legitimize Flair. Now, he was in a different wrestling world that pushed stars like Hulk Hogan, Andre “the Giant”, Randy “Macho Man” Savage, and the Ultimate Warrior, larger-than-life stars. However, at Royal Rumble 1992, Flair won the vacated WWE Title by lasting nearly 1 hour as the 3rd entrant into the Rumble. Flair would feud with Randy “Macho Man” Savage to co-headline Wrestlemania 8. A few months later, Ric Flair would regain the WWE title for a second run before handing the belt off to Bret Hart. After years of enjoying success in the South, Flair made it up North.

Ric Flair would return to WCW during early 1993 where he’d remain with the company until it was acquired by WWE during March 2001. When WCW let him, he’d regain the World Title and continue to have epic matches in the Main Event when called upon. Flair continued to defy age. Then, he ran into another WCW Executive who lusted over Hulk Hogan and actually brought in Hogan during 1994. Ric Flair had repeated issues with Eric Bischoff, especially as the New World Order ramped up in popularity and the reliance on Flair to “save the day” was no longer there. Flair would be off and on with WCW during the late 1990’s but did return during WCW’s final year and actually wrestled in WCW’s final match ever against Sting. Flair, possibly awaiting his WCW contract to expire with AOL/Time Warner, was not part of the WCW Invasion during the Summer of 2001.

But Flair did join the WWE after Survivor Series 2001 first in a non-wrestling role as co-owner of the WWE, but he was quickly lured back into the ring. Wrestling occasionally at first, Flair began working with Triple H and formed the group Evolution with Batista and Randy Orton. Flair’s enjoyment with this group prompted him to become a full time wrestler again and he had decent success as a midcard wrestler. Flair’s WWE run ended in style, as he was put in a storyline where he would be forced to retire upon his next loss. Flair had the guts to challenge Shawn Michaels to a match at Wrestlemania 24. Michaels beat Flair, but once again, Flair helped to deliver in a big event match. In fact, the Pro Wrestling Illustrated magazine ranked the match as “Match of the Year”.

Flair continues to cling onto his wrestling legacy, as he had a brief TNA run and now he’s back with the WWE on a limited role. He has certainly had his share of personal problems but it’s probably due to how much he’s dedicated to the pro wrestling business spilling over into his personal life. In other words, the man who entered the wrestling business in 1972 as Richard Fliehr let the character “Nature Boy” Ric Flair take over everything professionally and personally. Certainly, it has created some questionable headlines outside of the ring. However, it comes at a cost of giving us a fully dedicated wrestler in Ric Flair. Most of all, Flair has made it from his own hard work as he didn’t have the Vince McMahon/WWE marketing machine behind him for most of his career. He overcame Ted Turner/Time Warner placed executives who didn’t understand the business but also exerted ageism towards Flair.

No other wrestler is more complete as a wrestler than Ric Flair and being forced to overcome the circumstances stacked against him. He was a great champion, worker, and dedicated professional whom we’re all lucky to watch as a wrestler. As a member of LordsofPain.net, I proudly induct my favorite wrestler of all time into the LoP Hall of Fame. Thank you very much, Ric, for all that you’ve sacrificed to entertainment for my entire life as a pro wrestling fan.