EXCLUSIVE: @RealTSteelz is ready to prove she's the brightest star in the sky against Kylie Rae NEXT on IMPACT! #IMPACTonAXSTV pic.twitter.com/E8LL14kATT 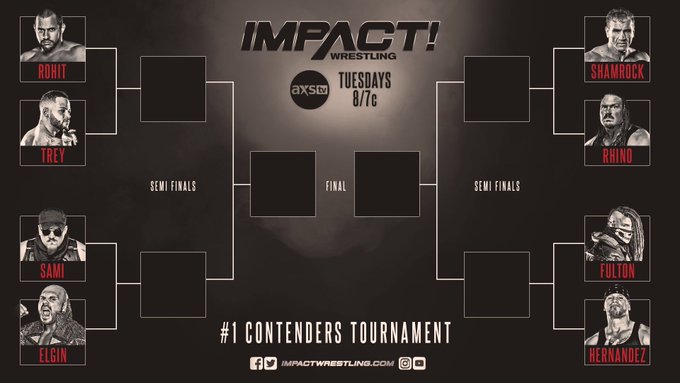 First Match: Madman Fulton w/oVe vs. Hernandez in a First Round Match In The Number One Contenders Tournament For The IMPACT World Championship

Number One Contender, The Next Impact Wrestling World Champion. Michael Elgin stands in front of you as both, but still Impact Wrestling wants to have a number one contenders tournament. Why do I have to prove myself. For 16 years, I’ve proved myself. For 16 years, I proved, I am a champion. I have proved that there’s not a person on the planet that can lace my boots. I have proved that i’m the best. So Impact Wrestling, if you want a number one contenders tournaments, what happens next is on you. Because if beating people isn’t good enough, I might have to go back to sending them to the hospital.

Collar and Elbow Tie Up. Steelz applies a wrist lock. Rae reverses the hold. Steelz with a side headlock takeover. Rae answers with a headscissors neck lock. Steelz shows off her athleticism. Steelz taunts Rae. Back to the collar and elbow tie up. Rae applies a side headlock. Rae with a side headlock takeover. Steelz answers with a headscissors neck lock. Rae gets back to a vertical base. Rae and Steelz are running the ropes. Rae drops Steelz with a shoulder tackle. Steelz drops down on the canvas. Steelz leapfrogs over Rae. Rae with two deep arm-drags. Rae dropkicks Steelz. Steelz dumps Rae face first into the top turnbuckle pad. Steelz mocks Rae. Steelz kicks Rae in the face. Steelz with three short-arm clotheslines for a two count. Steelz applies a rear chin lock.

Rae repeatedly backs Steelz into the turnbuckles. Rae kicks Steelz in the face. Rae rolls under a clothesline from Steelz. Rae with two clotheslines. Short-Arm Reversal by Steelz. Steelz sends Rae to the ring apron. Rae with a straight right hand. Rae with a shoulder block. Rae connects with The Kylie Special for a two count. Rae locks in Smile To The Finish. Steelz grabs the bottom rope to create separation. Steelz decks Rae with a back elbow smash. Steelz dives over Rae. Rae with a back elbow smash. Rae launches Steelz over the top rope. Steelz with an Apron Enzuigiri. Steelz follows that with a Flying Crossbody Block for a two count. Steelz goes for The SpringBoard Bulldog, but Rae counters with a Leg Sweep FaceBuster. Rae makes Steelz tap out to The Smile To The Finish.

"My mother – she calls me son because I shine like one." @HakimZane is ready to seize the opportunity in the #1 Contenders Tournament TONIGHT. #IMPACTonAXSTV pic.twitter.com/qoBXdW94b3

Lee ducks a clothesline from Havok. Lee with forearm shivers. Havok screams at Lee. Havok with Two Big Biel Throws. Lee side steps Havok into the turnbuckles. Lee delivers machine gun chops. Havok shoves Lee into the turnbuckles. Havok with forearm shivers. Havok with a blistering chop. Havok blocks a boot from Lee. Lee kicks Havok in the face. Lee goes for a Flying Hurricanrana, but Havok counters with The SitOut PowerBomb for a two count. Lee with a High Head Kick. Lee follows that with a Step Up Enzuigiri. Lee puts his leg on the back of Havok’s neck. Lee uses the middle rope as a weapon.

Lee with a running forearm smash. Lee starts choking Havok in the corner. Lee is choking Havok with her boot. Havok denies the irish whip. Lee applies The Octopus Stretch in the ropes. Lee dropkicks the left knee of Havok. Lee drops Havok with a RoundHouse Kick. Nevaeh is lurking in the background. Lee connects with The Swanton Bomb for a two count. Havok caches Lee in mid-air. Havok hits The SitOut Uranage Slam for a two count. Havok is displaying her frustration. Havok stares down Nevaeh. Lee puts on brass knuckles behind the referee’s back. Havok puts Lee on the top turnbuckle. Havok is throwing forearms at Lee. Lee clocks Havok with the brass knuckles to pickup the victory.

.@TheSamiCallihan plans to move into the Second Round by any means necessary against @MichaelElgin25. #IMPACTonAXSTV pic.twitter.com/swzITKzaRV

Fourth Match: Trey Miguel vs. Rohit Raju in a First Round Match In The Number One Contenders Tournament For The IMPACT World Championship

Collar and Elbow Tie Up. Raju applies a wrist lock. Miguel reverses the hold. Raju regains wrist control. Miguel blocks a chop from Raju. Miguel slaps Raju in the chest. Miguel with The Lucha Libre Arm-Drag. Miguel pops back on his feet. Miguel drops Raju with a shoulder tackle. Raju drops down on the canvas. Raju fights out of the electric chair position. Miguel ducks a clothesline from Raju. Raju with a running forearm knockdown. Raju with a straight right hand. Raju punches Miguel in the back. Raju repeatedly stomps on Miguel’s chest. Miguel dives over Raju. Miguel shows off his athleticism. Miguel with a Cazadora Knee Smash. Miguel rolls under the back elbow strike from Raju. Miguel with a HeadScissors TakeOver. Miguel cranks on Raju’s neck. Raju regroups on the outside.

– This weeks IMPACT Plus! Flashback Moment Of The Week is the AJ Styles/Matt Hardy match from TNA Victory Road 2011.

.@DashingChrisBey's suggestion that @Willie_Mack said that he was the star of the Mack and Pack Connection has infuriated Johnny Swinger. #IMPACTonAXSTV pic.twitter.com/D6e3lC3pXd

Johnny Swinger is going to bring @Willie_Mack into the royal HUMBLE next week with the X-Division Championship on the line! #IMPACTonAXSTV pic.twitter.com/Ahgsr20e8j

Checkout Episode 204 of The Hoots Podcast

Eric Bischoff On CM Punk Potentially Returning To WWE: ‘I Don’t Think It Would Be A Good Business Decision’