Nash has partnered with HYMAN Cannabis to release the strain named after his signature powerbomb finisher, which was first announced back in January at the GCW Notorious event from Detroit, Michigan. Now the Jackknife strain is being released, and Nash will be making a two-day dispensary signing tour of his home state, Michigan, to meet fans, sign autographs and promote Jackknife.

A press release issued to us today noted, “With a career garnering six world title belts and 21 championships, Nash is one of only eight individuals with the elite distinction of being twice inducted into the WWE Hall of Fame. While holding such an honorable title also comes years of physical wear and tear on the body. He was able to turn his pain into passion when he discovered he found relief with cannabis. Nash is an occasional smoker and he began using Chill Medicated, a THC & CBD topical rub to treat his ailments. This topical doesn’t get you high while minimizing pain, inflammation and more. This was the gateway to his connection with MEDfarms, a management company based out of Michigan that works with countless cannabis entities. He truly believes that the use of pain medication is not the most suitable course of action to address his health concerns. Naturally, Nash chose to name his signature strain after his signature move, Jackknife. Having undergone a rigorous process of pheno hunting with HYMAN cultivators, he opted for the strain crossing of Creamsicle (a favorite amongst stoners) with Soñando (one of HYMAN’s marquee genetics) to craft a legendary strain for a legendary pioneer in wrestling.”

Nash provided comments on his cannabis strain and revealed why he chose HYMAN to partner up with.

“I’m familiar with cannabis, and the one thing I look for when I’m consuming marijuana is quality. HYMAN cultivators have achieved a level of quality that is like nothing else I’ve tried. The clarity, potency, and their entire internal process is why I chose them – everything HYMAN does is by design,” Nash explained.

You can see a promotional graphic for Jackknife at the bottom of this article.

The Jackknife cannabis strain will be released on Friday, September 2 at dispensaries in Michigan. The cannabis will be available in a 3.5g Pre-Packs (eighth) and 1g Handcrafts (glass tip joint). You can find a list of participating dispensaries below.

Below is a list of dispensaries that will carry Jackknife: 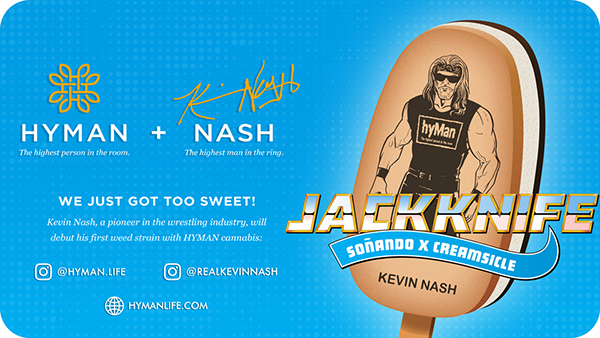 A picture tells a thousand stories. Enjoy responsibly. This flower is amazing. Thank you @ https://t.co/5WSBBXVRwv for your meticulous perfection. pic.twitter.com/ZMgL8PjTtN

Drew McIntyre On His Upcoming Extreme Rules Match, How Great The Clash at the Castle Crowd Was

Tony Khan Announces That RUSH Has Officially Signed With AEW

Chris Jericho Aiming For A Showdown With Sting In AEW: “There Has To Be A Sting and Jericho Match”

Backstage Updates on Fallout from the AEW All Out Fight, Potential Legal Action, More

Why Tony Khan Booked CM Punk vs. Jon Moxley for AEW Dynamite Instead of All Out