by Marc Middleton
in AEW News and Rumors
A A
16

WWE Hall of Famer Kurt Angle has deleted his reaction to a name-drop on last night’s New Year’s Smash edition of AEW Dynamite.

Dynamite saw AEW World Tag Team Champions The Acclaimed debut their new “RASSLE” music video, which included shots at Jeff Jarrett and Jay Lethal. During the rap, Max Caster mentioned Karen Jarrett as “Kurt Angle’s wife,” a reference to how she was married to Angle before Jarrett. He said, “And you’re stealing money like it’s Kurt Angle’s wife.”

Angle took to Twitter after the show with a reaction to the line.

“When you got to use my name to get heat after 12 years [smile emoji] [thumbs up emoji] #MoveOn,” Angle wrote.

Angle deleted the tweet not long after posting it. Caster has not acknowledged Angle’s deleted tweet as of this writing.

You can see The Acclaimed’s new music video below, along with a screenshot of Angle’s deleted tweet: 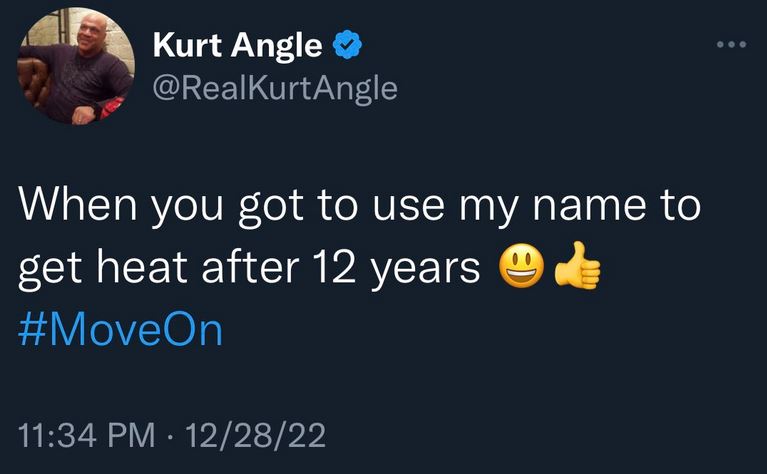 Seth Rollins on Why He Doesn’t Like Logan Paul, Rollins Has Harsh Words and WWE RAW Call-Out for Paul