by Marc Middleton
in AEW News and Rumors
A A
7

MJF continues to be a trending topic coming out of AEW Double Or Nothing Weekend, where his ongoing issues with the company and AEW President Tony Khan led to him no-showing Saturday’s Fan Fest, just hours before he lost to Wardlow in the pay-per-view opener. MJF arrived to the arena during the pre-show, then left right after he was stretchered away from the ring.

Fans on Twitter this evening noticed how MJF “liked” a tweet that quotes PWTorch editor Wade Keller, who commented on how WWE officials see MJF.

“One source in WWE told me that MJF is seen as such a commodity that his recent and tractable behavior on and off-air with AEW wouldn’t deter Vince McMahon from making him a lucrative offer,” the Keller quote stated.

The tweet is still listed under MJF’s “Likes” as of this writing, which you can see in the screenshot below.

Earlier we reported on several behind-the-scenes updates on MJF and AEW, including his pay and what former WWE guys are making, based on an in-depth report from Keller. You can click here for that full report.

Regarding WWE and MJF, it’s no secret that WWE has interest in the up & coming star, who will see his AEW deal expire on January 1, 2024. MJF has expressed some interest in possibly going to WWE, but has also said that he will be wrestling where the money is come 2024.

MJF reportedly met with Khan on Tuesday night, but there’s still no word on how the meeting went, if it happened at all. AEW announced earlier today that MJF will speak during tonight’s live Dynamite from Double Or Nothing.

UPDATE: MJF appeared during the first hour of AEW Dynamite tonight and delivered a strong promo. You can click here for details.

Regarding tonight’s Dynamite appearance, some fans on social media have criticized the move as they feel like it’s downplaying Wardlow’s dominant win at Sunday’s Double Or Nothing pay-per-view as MJF should’ve been kept off TV for at least a week to sell the stretcher job. It remains to be seen how they will cover the MJF – Wardlow payoff on tonight’s show.

Stay tuned to WrestlingHeadlines.com for more on MJF. You can see the tweet screenshot below, along with links to our various reports on the situation between the two sides. 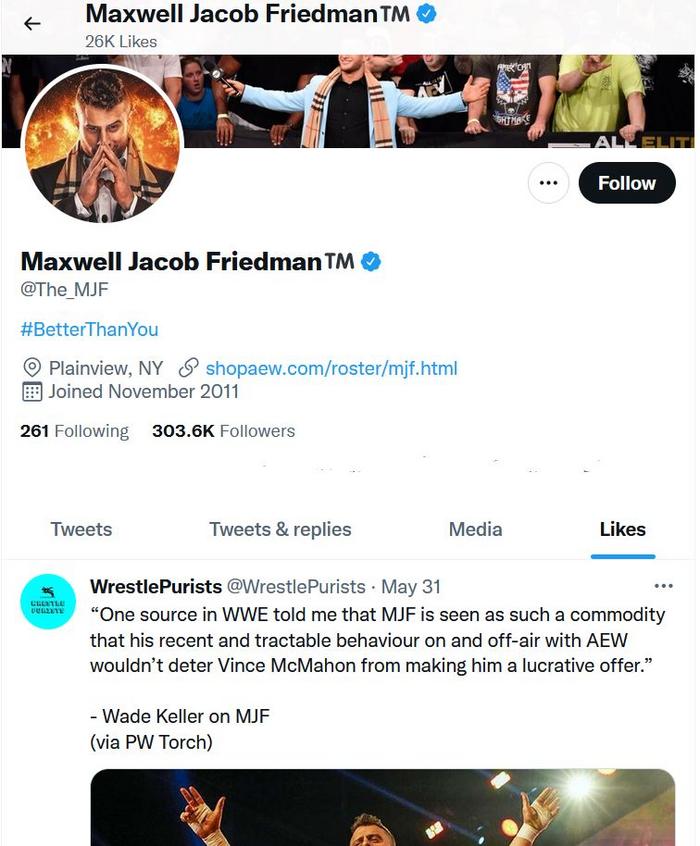 – MJF Has Locker Room Heat, What Happened When MJF Arrived to AEW Double Or Nothing, More

– MJF Does Appear At AEW Double or Nothing, Gets Powerbombed To Oblivion By Wardlow

Eric Bischoff Has High Praise For Kevin Owens, Thinks His Star Power Will Continue To Grow In WWE

JBL: ‘John Cena Is The Best Representative Of Pro Wrestling That I’ve Ever Seen’

Carmella Says She Rises To Every Occasion WWE Hands Her

Eddie Kingston Not Pumped About Teaming With Claudio At Blood & Guts: “I Don’t Trust The Guy”