MVP took to Instagram this week and responded to a fan who said he should help Keith Lee.

MVP made an Instagram post that marked one year since he returned to regular action with WWE. He worked the 2020 Royal Rumble Match in his return, then lost to Rey Mysterio on the January 27 RAW, and lost to Drew McIntyre on the February 17 RAW. The April 20 RAW, where he lost to current WWE Intercontinental Champion Apollo Crews in a Money In the Bank qualifier, was the beginning of his regular return to the storylines. He started appearing regularly in May and linked up with WWE Champion Bobby Lashley, an alliance that remains strong.

“What a difference a year can make…,” he wrote as the Instagram caption, on a photo of the WWE logo.

A fan responded in the comments section and said MVP should help Lee by bringing him into The Hurt Business. Lee has been out of action since February with his WWE status up in the air.

The fan wrote, “You should help @realkeithlee make his return by introducing him as your bodyguard or something in the hurt business.”

“No I shouldn’t,” MVP responded.

As we’ve noted, Lee has been out with unknown health issues, not because of creative not having anything for him. It was reported a few weeks back that he had not been cleared to compete. 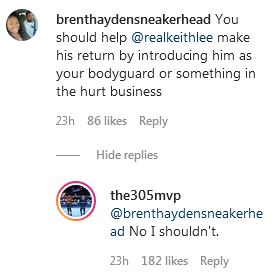 Booker T Not A Fan Of CM Punk Defeating Darby Allin At AEW ALL OUT: “No Reason For Darby Allin To Get Beat”

The Rock Has Big Praise for WWE SmackDown Superstar

Tonight’s Impact Wrestling Opener Revealed and More for the Show