Former WWE Champion Dwayne “The Rock” Johnson has been named the #1 reason to love America by People Magazine.

Rock is on the cover of the June 28 issue of People, which names the top 100 Reasons to Love America. The issue hits newsstands this Friday.

The Great One, who was photographed in Hawaii for the People shoot, took to Twitter today to comment on the nod from People.

“Thank you [folded hands emoji] Very humbling to grace the cover of @PEOPLE as the #1 reason ‘To Love America’ [red heart emoji] [United States flag emoji] I realize the things that matter most in life are the things that are right in front of us. Family. Friends. Mana [tumbler glass emoji] Happy Fathers Day. Enjoy the read [shaka emoji],” Rock wrote.

WWE congratulated Rock on their website and wrote, “He’s won multiple championships, sold out arenas, and smashed box-office records … and now The Rock is the No. 1 reason to love America according to the newest edition of People Magazine! The aptly-named People’s Champion took to his social media to express his heartfelt gratitude and accept the honor as he graces the cover of the newest issue just in time for Father’s Day. Expect to learn a lot about ‘family, friends and mana’ from the absolute No. 1 reason to love America when the people’s edition of People Magazine hits newsstands this Friday. Congrats, Rock!”

Rock also gave comments to the People website and said he’s even more humbled to receive this honor than he was when People named him the Sexiest Man Alive in 2016.

“It feels great. I’ve been a lucky guy over the years to have the career that I’ve been blessed enough to have,” Rock said. “And things like this, I’m always appreciative. We’re here in Hawaii, where I did a lot of my growing up… I was just Dwayne Johnson, the kid who’s having a hard time going to school making his classes. I never expected in my wildest of wild dreams that I would ever be in a position to be on the cover of PEOPLE – and certainly not with this kind of title.”

People noted how during the COVID-19 pandemic Rock became even more appreciative of his “blessed” life with wife Lauren Hashian, their daughters Jasmine and Tia, and his daughter Simone, who is signed to WWE, with ex-wife and production partner Dany Garcia.

“It was a shakeup for us,” he said of the pandemic. “I did this weird thing every day where I still got up and got dressed like I was getting ready to go someplace. I mean, shoes and all. That helped me psychologically. On a relationship and marriage standpoint, you realize you have to really be attentive to your reactions and responses, because your patience capacity starts to compress.”

Rock noted that he had to learn “to have better patience” during the pandemic.

“I would marvel at Lauren,” he said. “We would conduct [at-home school] classes; she would be the teacher, and I sat there crisscross-applesauce with my daughters, and within five minutes I was like, ‘God, I am so tired.’ And my wife was going and going and going.”

Rock and Hashian have been married since 2019 but they are longtime loves. He appreciates “the ease of being in our relationship now, I think going on 13, 14 years-she’s going to kill me that I don’t know the exact number,” he said, laughing. “But there’s a comfort. We may argue, but truly within 10 minutes we pull ourselves out of it and find some humor in the things that we just said. Mainly the things that I just said.”

Finally, Rock insists he will never take his own blessings for granted.

“The most important things are right in front of me,” Rock added. “I am in constant thank-you mode.”

You can see Rock’s full tweet below, along with the People cover photo:

Thank you 🙏🏾
Very humbling to grace the cover of @PEOPLE as the #1 reason “To Love America”❤️🇺🇸
I realize the things that matter most in life are the things that are right in front of us.
Family. Friends. Mana 🥃
Happy Fathers Day
Enjoy the read 🤙🏾https://t.co/KvgCPj4KBL
~dj 🖤 pic.twitter.com/rv0ImEXxUg 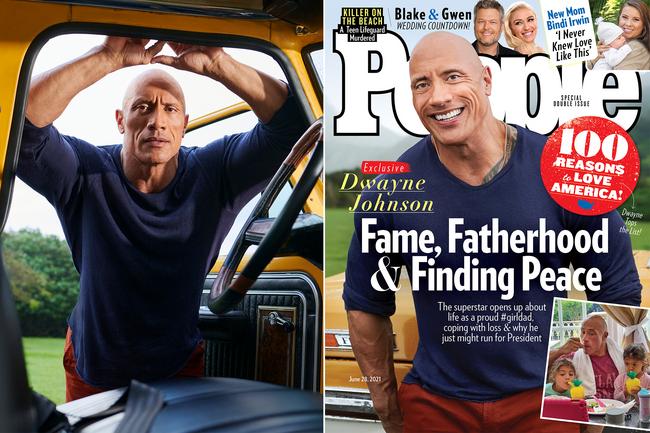 WWE NXT Viewership Down for This Week’s Taped Episode, Key Demo Rating Up

Eddie Kingston Would Love To Tag With Westside Gunn, Talks His Relationship With Ruby Soho

Saraya Booking Nixed Due to AEW

Freddie Prinze Jr On Saraya’s AEW Debut: ‘It Was So Awesome To See Her Get That Reaction’

WWE King of the Ring Returning This Year?