by Marc Middleton
in AEW News and Rumors
A A
8

Renee Paquette has explained a viral group photo from the recent wedding of Carmella and Corey Graves.

As noted, Graves and Carmella tied the knot last Thursday in Florida, and several wrestlers were in attendance, including Paquette and her husband, Jon Moxley. Liv Morgan tweeted a group photo from the ceremony, that included Paquette, Moxley, Tamina Snuka, Sonya Deville, Bayley, Tyson Kidd, Natalya, and Happy Baron Corbin with his date.

The photo was a topic of discussion on social media as Moxley can be seen wearing a Cincinnati Bengals t-shirt, a leather jacket, jeans, a fanny pack, and his wrestling boots. You can see the photo below.

Paquette gave some background information during the latest episode of her “Throwing Down” podcast with Miesha Tate on SiriusXM, revealing how Moxley wasn’t able to arrive to the wedding until the bride was already walking down the aisle. Moxley had been in Boston for last Wednesday’s AEW Dynamite taping, and barely made it to the ceremony.

“Jon and I got to attend a wedding last week, Corey Graves and Carmella,” Paquette said. “We got to go watch them in their wedded bliss. It was beautiful, it was such a great time, and since then, it turns out Jon has been trending on social media over a group photo. So it’s everybody fully dressed up in, like, beautiful wedding gowns, all of these things, and then Jon is dead center in his wrestling boots, jeans, fanny pack, and a Cincinnati Bengals t-shirt, and leather jacket. In classic Jon fashion, I will say. The fanny pack… oh my God. It was such a great group of people, it was so much fun.”

Tate then asked if Moxley was just arriving or ready to leave when the photo was taken.

“OK, so what happened was, I flew into the wedding the day of,” Paquette answered. “I got there Thursday morning, and he was flying in from Boston [where AEW Dynamite was held the day before] and he had to fly to Miami because there was no other flights to get into where their wedding was, and then he had to take an Uber from the Miami airport to where the wedding was… after flights already being delayed. He was already crunching time… like, I showed up to the wedding with his suit, with his shoes, I had the whole thing. I had to find one of the bartenders… I’m like, ‘Can I hang this somewhere until my husband gets here?’ And then he’s texting me and he’s like, ‘I’m gonna be there in five minutes.’ I was like, ‘Cool, dude. Well, guess what? The wedding is starting. They’re walking down the aisle. It’s happening.’

“As Carmella is walking down the aisle, he’s at like the entrance with his luggage, dressed as so, and as everybody stood to watch the bride walk down the aisle, he was able to sneak in beside me to watch the wedding. So, that picture was right after the wedding actually happened. And, yeah, he was wearing that. He did change afterwards, I will say. He didn’t change into what we fully bought, though, so he just put on like the black button-down shirt.”

Graves and Carmella are currently on their honeymoon in Hawaii. WWE Hall of Famer Jerry Lawler is filling in for Graves on RAW commentary, and Carmella’s feud with former tag team partner Queen Zelina Vega was put on hold.

Moxley is currently teaming with Bryan Danielson and ROH Pure Champion Wheeler Yuta in AEW, as The Blackpool Combat Club, managed by William Regal. They will make their Trios Match debut this Friday on the live AEW Rampage from Garland, TX as they go up against The Gunn Club.

You can see the viral wedding photo below, along with Liv’s full tweet and the clip from the “Throwing Down” episode:

"Classic Jon fashion, I will say."@ReneePaquette sheds some light on the outfit her husband, Jon Moxley, wore to a wedding that had him trending on Twitter 😂 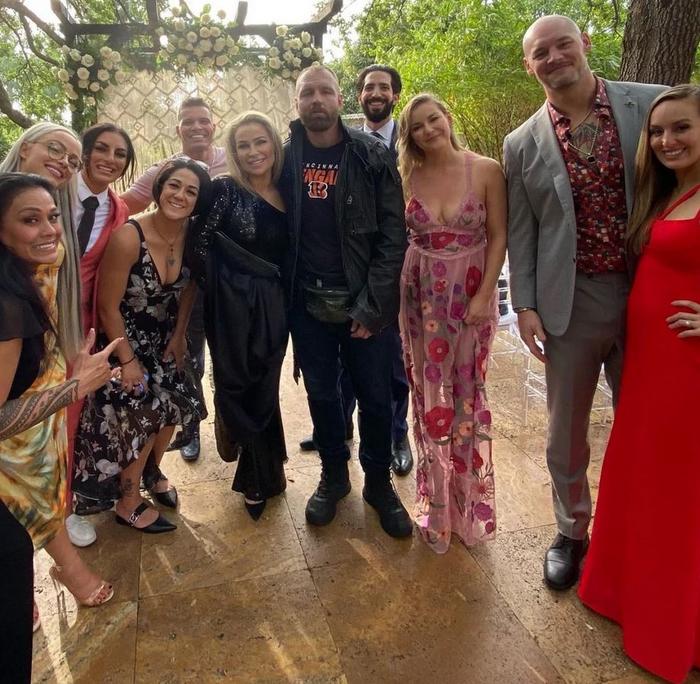 AEW Double Or Nothing Countdown Show To Air, Update on This Week’s AEW Rampage Start Time

Josh Alexander Reveals When IMPACT Approached Him To Be In The Main Event Scene, Talks A Possible Reunion With Ethan Page