Ricochet Tweets & Deletes on Io Shirai, Goes Back & Forth with WWE Fan

by Marc Middleton
in WWE News, WWE Rumors and Spoilers
A A
23

Ricochet went viral on Twitter today after deleting a tweet he made during an exchange with a WWE fan on Monday night.

The exchange began after the RAW Superstar responded to an official WWE tweet that asked fans to name the best high-flyer in the company right now.

“There’s literally no one who can do what I do and how I do it. But I’ll let y’all discuss. [sunglasses face emoji],” Ricochet responded.

The fan, @ADTR19961, responded to Ricochet and wrote, “Uhhhh because there’s more than one style of high flying sir.”

Ricochet wrote back, “And none are as good as mine. [man shrugging emoji]”

The fan then name-dropped WWE NXT Superstar Io Shirai, writing, “Touche. In that aspect I can agree, but @shirai_io is also a phenomenal high flyer as well. She’s the best at what she does [woman shrugging emoji]”

In a now-deleted tweet, Ricochet wrote back and said he can do everything Shirai can, probably better, but she can’t do what he’s capable of, maybe not even half of it.

He wrote, “I’m not saying she’s not amazing. She 100% is. But I can do EVERYTHING she can, probably even better. She can’t do what I am capable of, maybe not even half.”

That tweet was soon deleted due to backlash from fans.

The fan continued tweeting back & forth with another fan today, noting Ricochet has “huge potential” that WWE puts a cap on, adding that his best work was before WWE. Ricochet responded with the “folded hands” emoji.

That ended the initial exchange but another fan responded to Ricochet’s original response to the WWE tweet and took shots at him.

The fan wrote, “A shell of his former Indy self and Be a jobber with a middling career with no upward mobility and afraid to leave the security of the wwe?”

Ricochet responded, “Man, I bet you felt real good when you were typing this? Haha”

Ricochet has worked WWE Main Event matches for the most part this year, until his non-title loss to WWE United States Champion Sheamus on Sunday’s WrestleMania Backlash Kickoff pre-show. He then lost another non-title match to Sheamus on last night’s RAW. It was teased that the Ricochet vs. Sheamus feud may continue.

You can see the related tweets below, along with a screenshot of the deleted tweet from Ricochet:

Uhhhh because there's more than one style of high flying sir.

Touche. In that aspect I can agree, but @shirai_io is also a phenomenal high flyer as well. She's the best at what she does 🤷🏻‍♀️ 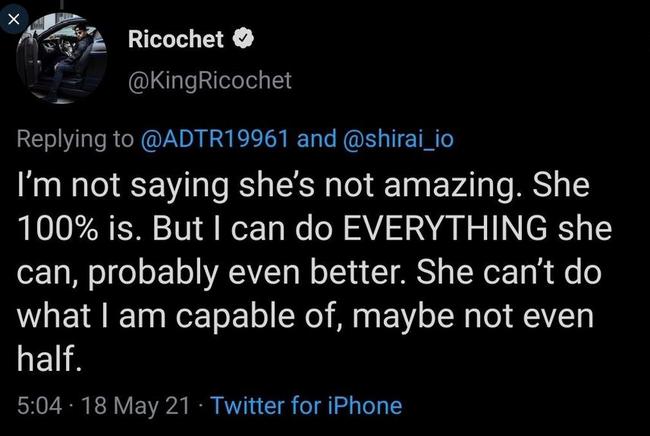 Man, I bet you felt real good when you were typing this? Haha

Tucker Reveals Story Behind Heavy Machinery Split, Says He Was Lied To

Can’t Knock The Hustle: Who Wins The Money In The Bank Briefcases This Year?