Home » COLUMNS » Sir Sam's Court » Sir Sam’s Court: Why My Favourite Wrestler’s Return Could Be The Worst Thing For The WWE Right Now

Sir Sam’s Court: Why My Favourite Wrestler’s Return Could Be The Worst Thing For The WWE Right Now

Of course. Daniel Bryan is in some ways my first wrestling love, his run to Wrestlemania 30 is what got me back into wrestling after years in the wrasslin’ wilderness. The way he organically rose up to the point where he could simply not be denied was one of the greatest builds in wrestling history. When he eventually won the Heavyweight Title it felt like the WWE had finally listened to us fans, given our guy the chance to take the ball and run and it is still one of my most treasured wrestling memories. So I must be ecstatic that the guy I love is coming back right?

See while Daniel Bryan was absolutely the hook that brought me back to wrestling, he was not the reason I’ve stayed. Since he went AWOL on what now feels like the night after he won those titles four years ago, I have found other wrestlers in the current generation that I love, perhaps even more than Daniel. Guys like Dean Ambrose, Seth Rollins, Kevin Owens, Braun Strowman, even Roman Reigns are the reason I tune in, they are the reason I started writing about wrestling and they are the guys I want to see the future of pro wrestling built upon. So while I should be over the moon that Daniel Bryan is back, for two reasons my excitement is tempered with worry that my favourite wrestler’s return could actually cause long term damage to the WWE, firstly by prolonging the part time problem that has become a millstone around the neck of the generation I love and secondly that, as a fan base the focus on Bryan may end up with us doing this: 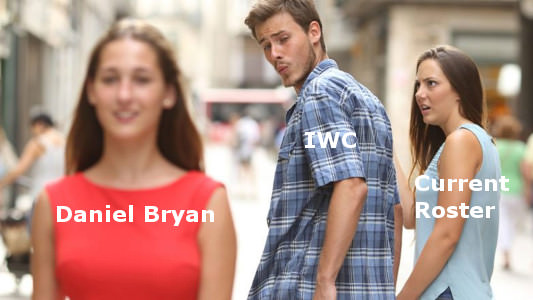 Let’s start with the WWE first though. The reception to Bryan’s return has seen nothing short of a groundswell of interest and positivity around the WWE. Bryan’s name was trending on Twitter globally when the WWE announced his comeback and at the time of writing the three segments the WWE has put on their Youtube channel of his return to the ring have each generated over a million views in only 6 hours. That is twice as much as the next most viewed Smackdown segment. While I don’t normally rate ratings I can bet that this episode of Smackdown will set some sort of bar for recent months programing. All of this shows one thing clearly, Daniel Bryan is a top level star who generates interest in the company.

And that would be a great thing most of the time, however the clear perception amongst those that matter in the company is that the current generation of wrestlers are not stars on the same level, they do not generate the same amount of interest and therefore do not receive the full backing of the company. This and this alone is the reason that Shane McMahon now has an annual match at Wrestlemania, it is why The Undertaker is going to come out of a retirement he should have entered years ago for one more match and, most criminally, it is why two of the current generation’s stars have never been trusted to main event the biggest show of the year against one another. I am of the belief that the WWE is currently in the possession of the most talented roster of wrestlers it has ever had, men and women that can tell some of the best stories inside the ring the company has ever told, however all of will be squandered if they are continually positioned as second best to stars of the past when it matters most. It has already happened to one generation of wrestlers who through such terrible roster positioning and booking were never even given the chance to become the stars the WWE wanted them to be.

It worries me that this sudden change of heart by the WWE has come when those aforementioned men were on their way out the door and through time alone it looked like the WWE was going to be forced to finally fully embrace this generation. While it is clear that Bryan will be back, most likely in a return match at Wrestlemania, it is not at all clear what kind of capacity he will be back in. If he is only going to be coming back as a special attraction at the biggest PPVs and become yet another Triple H, Kurt Angle, Undertaker, John Cena or Shane McMahon that the WWE rolls out to take the biggest spots on the biggest stages, then we may as well kiss the potential of this generation goodbye. Let’s just hope there is a card left for Pete Dunne and Tyler Bate to main event in ten years time.

And while poor WWE booking is something you just have to get used to as a fan, the thing that worries me even more about Daniel Bryan’s return is actually us, the die hard fans. We simply love Daniel Bryan too much and will care too much about where he ends up sitting on the roster. I have already seen people fantasy booking his return to the World Championship, saying he should win the Rumble then take out the main event of Wrestlemania 35 and I worry about what will happen in the very likely event it doesn’t go down this way.

The IWC can be far too all or nothing with its fandom, particularly when it comes to Daniel Bryan. It is the originally passion that launched the YES Movement that brought me back to wrestling but it is also the same attitude that has seen too many angles ruined when things don’t go the fans way. Too often the crowds attitude is ‘give us what we want or we will wreck the show on you’. It is a petulant, self-entitled attitude that actually turns people away from wrestling and could cause irreparable harm to a baby face like Seth Rollins, Finn Balor or Dean Ambrose that could be pushed to the World Title level before Daniel Bryan and who the crowd decides to take their displeasure out on when they they don’t get what they want.

As evidence that this can happen we only need to look at how the crowd’s attitude ended up with Rey Mysterio, one of the most beloved wrestlers in WWE history, getting booed on his way to the ring at the Royal Rumble in 2014. It is also the attitude that has completely poisoned Roman Reigns who in that same year was the guy a lot of us were enthusiastically talking about as the future and even as a guy who could potentially be trusted to break The Streak but has been booed ever since he got in Daniel Bryan’s way. Outside of Bryan this same phenomenon happened to my favourite wrestler, Dean Ambrose, when the crowd suddenly decided they didn’t want him as champ anymore in 2016 and that it was AJ Styles ‘time’. This was of course despite proclaiming exactly the same thing about Ambrose just months earlier.

When it comes to Daniel Bryan, the minute I start to see lines like ‘he needs to be given back his spot’, expect me to run a mile. That kind of attitude just makes it a crappy time to be around wrestling, it may seem like common sense but focus on the negative has never made the show better or the matches more enjoyable. The positivity of Bryan return can, and I predict will, switch on a dime the minute Bryan is not positioned at the pinnacle of the company.

And I write all of this wanting to be proven wrong, wanting for the WWE to not continue to poison its own roster by using Bryan at the expense of the rest of the full time wrestlers. I want to cheer Bryan in whatever story he ends up in but right now I am worried that this could all end in tears. So before we go any further mark these words: sacrificing the current generation of stars at the feet of the company and the crowd is not a price worth paying for my favourite wrestlers return and if it happens then I will wish that Daniel Bryan had never come back.

But over to you LOP. Think I’m wrong and want to talk some Daniel Bryan? Why not let me know down in the comments below, follow me on Twitter @Sir_Samuel or even better signup for the LOP forums and join in on the Daniel Bryan discussion thread here. It is where every single main page columnist has come from and is an all around great place to talk about pro wrestling.

Doctor’s Orders: No! The Yes! Movement is NOT Over! (Plus, The Ultimate Deletion)