The winner of the Women’s Chamber will challenge for the RAW Women’s Title at WrestleMania 38. They will go up against either WWE Hall of Famer Lita or RAW Women’s Champion Becky Lynch, whoever wins the title match at Elimination Chamber, which as of now is just a standard singles bout for the title.

WWE has announced Liv Morgan, Bianca Belair, Rhea Ripley, Nikki A.S.H. and Doudrop for the Women’s Chamber bout. It’s interesting to note that the graphic for the match, seen below, shows a silhouette for a sixth mystery participant, but the official match preview has no mention of a mystery participant, at least as of this writing, but it does confirm that there will be six participants when going over the rules.

WWE Elimination Chamber will take place on Saturday, February 19 from the Jeddah Super Dome in Jeddah, Saudi Arabia. Below is the current line-up:

Elimination Chamber Match for a RAW Women’s Title Shot
Doudrop vs. Liv Morgan vs. Rhea Ripley vs. Nikki A.S.H. vs. Bianca Belair vs. TBA
Winner will receive a WrestleMania 38 title match for the RAW Women’s Title. 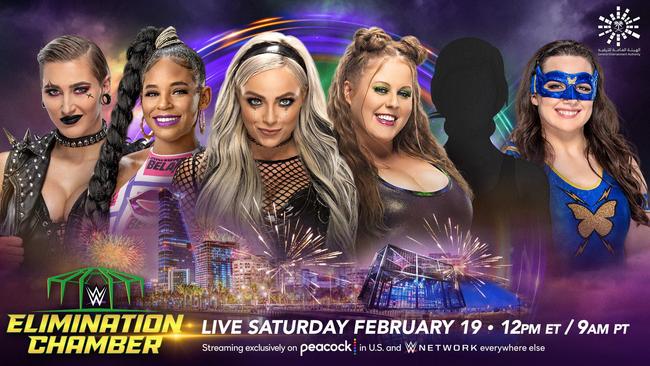 AEW Rampage Viewership and Key Demo Rating for This Past Friday