The brackets have been revealed for the 2022 WWE NXT Women’s Dusty Rhodes Tag Team Classic.

The women’s tournament will kick off this Tuesday when NXT 2.0 returns to the USA Network with the post-Vengeance Day episode. Last Tuesday’s special saw The Creed Brothers defeat MSK in the tournament finals to become the new #1 contenders to NXT Tag Team Champions Marcel Barthel and Fabian Aichner of Imperium.

First round matches announced for Tuesday’s show are Io Shirai and Kay Lee Ray vs. Amari Miller and Lash Legend, plus Ivy Nile and Tatum Paxley vs. Kayden Carter and Kacy Catanzaro.

The winners of the Women’s Dusty Classic will become the new #1 contenders to NXT Women’s Tag Team Champions Gigi Dolin and Jacy Jayne, and they will have their names added to the Dusty Cup trophy.

Below are the full brackets for the 2022 Women’s Dusty Classic: 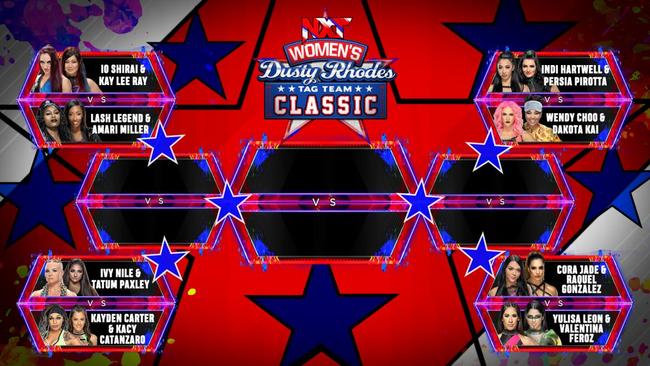 Kurt Angle: “The Marine Was Supposed To Be My Movie”

Eddie Kingston Calls Chris Jericho The “King Of Carnys,” This Week’s Being The Elite Now Online

Killer Kross on How He Felt About His RAW Gear, WWE Dismantling Triple H’s Vision, More