by Joshua Lopez
in RESULTS, WWE NXT Results
A A
0

Banks with a waist lock go-behind. Ahmed breaks free with a back elbow smash. Banks applies a sleeper hold. Ahmed crawls to the bottom rope to create separation. Ahmed drops Banks with a forearm smash. Ahmed with a clubbing forearm to Banks back. Ahmed uppercuts Banks. Ahmed and Banks are trading back and forth shots. Following a snap mare takeover, Ahmed with a seated splash for a two count.

Banks starts building momentum. Ahmed drives his knee into the midsection of Banks. Banks side steps Ahmed into the turnbuckles. Banks dropkicks the back of Ahmed. Banks with a Bridging German Suplex for a two count. Ahmed transitions into a ground and pound attack. Banks kicks Ahmed in the jaw. Banks with a ShotGun Dropkick. Banks with a Flying Double Foot Stomp. Banks connects with The Slice Of Heaven to pickup the victory.

Williams and Barthel will start things off. Collar and Elbow Tie Up. Williams applies a rear chin lock. Williams transitions into a side headlock. Barthel responds with a wrist lock. Williams reverses the hold. Williams with a wrist lock takedown. Jordan tags himself in. Jordan with a Flying Double Axe Handle. Jordan applies a wrist lock. Barthel kicks Jordan in the gut. Barthel with a clubbing blow to Jordan’s back. Jordan is playing mind games with Barthel. Barthel bounces Jordan’s head on the top turnbuckle pad. Barthel is throwing haymakers at Jordan. Barthel repeatedly stomps on Jordan’s chest. Barthel tags in Aichner.

Aichner with a clubbing blow to the back of Jordan. Jordan side steps Aichner into the turnbuckles. Jordan with rapid fire bodyshots. Aichner catches Jordan in mid-air. Jordan decks Aichner with a back elbow smash. Barthel delivers a cheap shot. Aichner and Barthel are cutting the ring in half. Aichner transitions into a ground and pound attack. Aichner tags in Barthel. Barthel is putting the boots to Jordan. Barthel poses for the crowd. Barthel makes another tag to Aichner.

Jordan is displaying his fighting spirit. Jordan ducks a clothesline from Barthel. Aichner drops Jordan with a SpineBuster. Barthel follows that with The PK. Aichner applies a rear chin lock. Jordan gets back to a vertical base. Jordan with a Stunner. Aichner drives Jordan back first into the turnbuckles. Aichner knocks Williams off the ring apron. Aichner tags in Barthel. Barthel with a Float Over Suplex for a two count. Barthel goes back to the rear chin lock. Barthel goes for a Belly to Back Suplex, but Jordan lands back on his feet.

Jordan tags in Williams. Williams with a SpringBoard Back Elbow Strike. Williams pulls Aichner off the ring apron. Williams rams his shoulders into the midsection of Barthel. Williams slips over Barthel’s back. Williams tags in Jordan. Williams lands a Suicide Dive. Barthel with a Corner Dropkick to Jordan. Barthel with a Leg Trap Suplex for a two count. Aichner dumps Williams back first on the barricade. Barthel tags in Aichner. Barthel and Aichner plants Jordan with their PowerBomb/Belly to Back Suplex to pickup the victory.

Jinny applies a double wrist lock. Jinny with the cover for a two count. Jinny works on the left shoulder of Floss. Jinny drives Floss shoulder first into the middle turnbuckle for a two count. Jinny transitions into a ground and pound attack. Floss kicks Jinny in the face. Floss unloads Two ShotGun Dropkicks. Jinny side steps Floss into the turnbuckles. Jinny with a Japanese Arm-Drag TakeOver. Jinny connects with The Touch Of Couture to pickup the victory.

Tyler Bate and Mark Coffey will start things off. Bate ducks a clothesline from Coffey. Bate is throwing forearms at Coffey. Bate dropkicks Coffey. Bate applies a wrist lock. Bate tags in Seven. Seven bodyslams Coffey for a one count. Seven tags in Bate. Seven with a Fireman’s Carry Slam. Bate follows that with a Senton Splash off Seven’s shoulders for a two count. Bate with Two Uppercuts. Bate applies a wrist lock. Bate with a Back Body Drop. Bate whips Coffey out of the ring. Wolfgang is running interference. Coffey attacks Bate from behind. Coffey is putting the boots to Bate. Coffey tags in Wolfgang. Wolfgang with clubbing bodyshots in the corner. Wolfgang with a short-arm clothesline. Wolfgang with a snap mare takeover. Wolfgang stomps on Bate’s back. Gallus starts cutting the ring in half.

Wolfgang applies a front face lock. Wolfgang drives his knee into the midsection of Bate. Seven avoids a punch from Wolfgang. Bate with a Hurricanrana. Bate tags in Seven. Seven ducks a clothesline from Coffey. Seven with a flurry of knife edge chops. Seven drops Coffey with a DDT. Seven with a Running OpenHand Chop. Seven with a Spinning Side Slam for a two count. Coffey made a blind tag. Seven goes for The Seven Lariat, but Coffey ducks out of the way. Wolfgang rocks Seven with a Forearm Smash. Coffey with a Belly to Back Suplex. Wolfgang follows that with a Running Senton Splash for a two count. Wolfgang transitions into a ground and pound attack. Wolfgang is mauling Seven in the corner. Wolfgang tags in Coffey.

Coffey drives Seven shoulder first into the top turnbuckle. Quick tags from Gallus. Wolfgang applies a waist lock. Coffey tags himself in. Coffey with a Forearm Smash for a two count. Coffey applies a deep waist lock. Wolfgang tags himself in. Wolfgang punches Seven in the gut. Seven is displaying his fighting spirit. Wolfgang with a waist lock takedown. Seven finally breaks free with the ear clap. Wolfgang dumps Seven out of the ring. Seven with a Vertical Suplex on the floor. Seven makes the hot tag to Bate. Bate kicks Wolfgang in the chest. Bate lands a Suicide Dive. Bate starts teeing off on Seven.

Coffey goes for a Back Body Drop, but Bate lands back on his feet. Bate ducks a clothesline from Coffey. Bate goes for a HandSpring Lariat, but Coffey counters with a Forearm Smash. Coffey with a Step Up Enzuigiri for a two count. Joe Coffey and Pete Dunne starts brawling on the stage. Coffey HeadButts Dunne. Dunne responds with a Forearm Smash. Dunne hits The X Plex on the ring apron. Bate drops Coffey with Bop and Bang. Bate tags in Seven. Mustache Mountain plants Coffey with their HandSpring Lariat/Snap Dragon Suplex Combination to pickup the victory. After the match, British Strong Style continues to brawl with Gallus. It will be Pete Dunne vs. Joe Coffey for the WWE United Kingdom Championship at WWE NXT UK TakeOver: BlackPool.

To have friendly or not-so-friendly competition?

Mastiff dropkicks Dennis for a two count. Mastiff with clubbing elbow smashes. Dennis rolls to the outside. Dennis goes for The Seven Bridge, but Mastiff lands back on his feet. Mastiff with a Rolling Senton on the floor. Dennis sends Mastiff crashing into the steel ring steps. Dennis and Mastiff are trading back and forth shots. The referee calls for the bell. After the match, Dennis and Mastiff continues to brawl around the ringside area. This issue will be settled in a No Disqualification Match at WWE NXT UK TakeOver: Blackpool 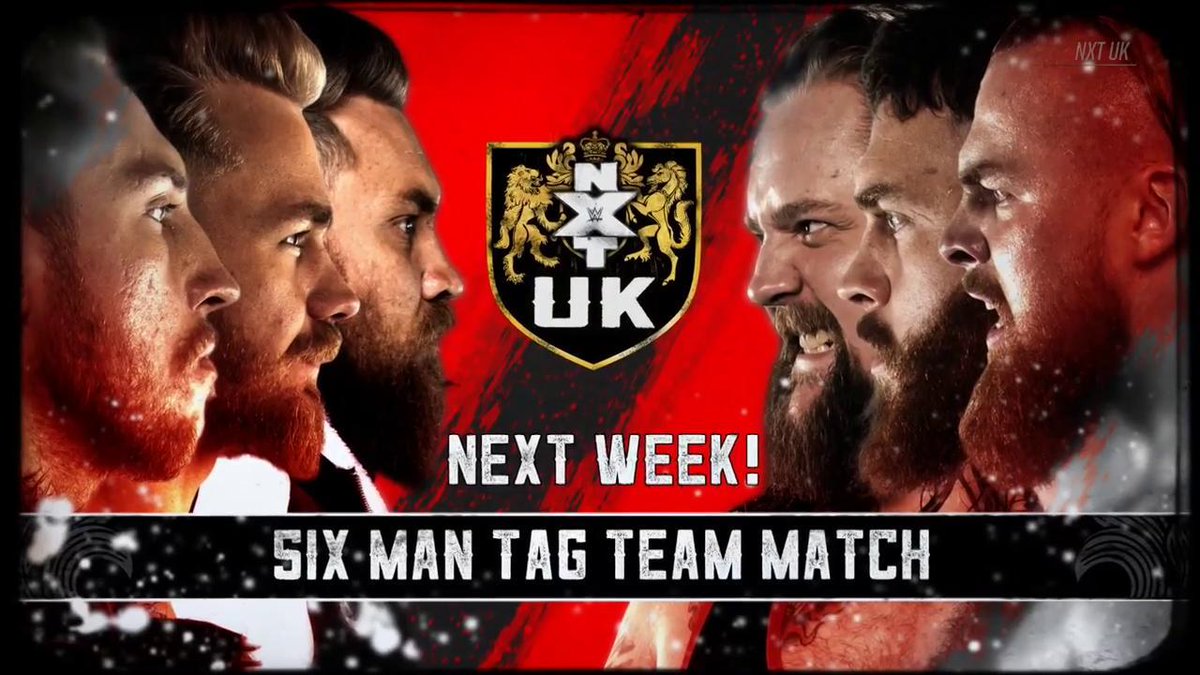 Check Out Episode 137 of The Hoots Podcast

Spoiler on the Final WWE Money In the Bank Participant

Damian Priest Recalls First Meeting With Scott Hall, Asking Him If He Could Use The Razor’s Edge

WWE Giving The Bloodline Another Member on the Main Roster Soon?

Imp’s NJPW Adventure – The Story of Hiroshi Tanahashi Part 2: The Ace of the Universe