by Marc Middleton
in WWE News, WWE Rumors and Spoilers
33

There’s a lot of speculation on WWE possibly doing an angle between Murphy and Aalyah Mysterio on RAW.

Last night’s RAW featured a moment where Aalyah stopped to check on Murphy at ringside as her family entered the steel cage to be with Dominik Mysterio following his loss to Seth Rollins. Murphy was down on the ground because Rollins attacked him after the loss.

It’s been speculated that Aalyah may have just stopped to briefly check on Murphy as a natural reaction, and nothing planned by WWE, but it’s interesting that they uploaded a photo of the two in the official RAW gallery for this week. You can see that photo below.

Rey Mysterio’s only daughter just turned 19 on August 20 and Murphy will turn 32 on September 26. This is a much different time in WWE, but Brooke Hogan was just 18 when she kissed Randy Orton during the July 31, 2006 RAW show. Orton was 26.

Stay tuned for updates on the possible storyline with Rey’s daughter. You can see the interaction in the video below: 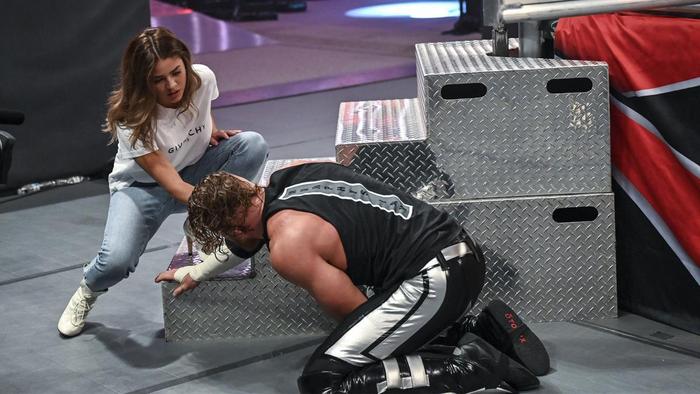 Triple H on Not Having Creative Control Once a WWE NXT Star Gets Called Up, NXT In the WWE Draft, RETRIBUTION

Stephanie McMahon on Tense & Stressful Times In WWE Over COVID-19, How Many Fans Have Requested ThunderDome Seats, More

Rudderless Retribution an Insult to Your Intelligence