WWE Selling New Replicas for The Undertaker at $1K and $500

WWE has released a new Deluxe Signature Series Replica Title for The Undertaker to celebrate his 30th anniversary.

WWE is also selling a standard version of the title for $499.99. These are not individually numbered and do not come with the urn-shaped case.

The deluxe version of the replica comes with a genuine leather strap, in an urn-shaped carrying case. The title plates are from the Winged Eagle version of the title that Taker won at Survivor Series 1991 by defeating WWE Hall of Famer Hulk Hogan, beginning his first reign, but silver & purple instead of gold & blue. The leather strap is crafted into an ornate gothic shape, and printed all over with heraldic flourishes and Taker’s iconic symbol, along with “Rest In Piece” where it fastens. The side plates feature the new Undertaker 30 logo.

The deluxe version is expected to be in stock on Friday, November 20. The $499.99 version is available now on WWE Shop. You can purchase the replica via this link to save.

Below are a few shots of the title below:

#WWEShop is celebrating #Undertaker30 with a new edition to the WWE Signature Series Championship Title Collection. Get your limited edition Deluxe version! Only 100 individually numbered titles made, with a leather strap & urn-shaped carrying case.https://t.co/efDRgcAsC4 pic.twitter.com/PyqYMlcAoV 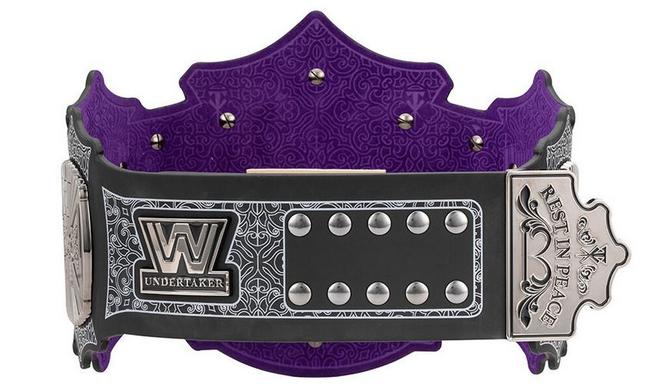 MLW To Return To Philadelphia In October With Fightland

Rikishi Talks WWE Storyline Between Roman Reigns and The Usos: “It’s Not A Story, That’s Really Them”

Updated Viewership and Ratings for WWE on A&E – Most Wanted Treasures Episodes, Season 1 Totals and Averages

Kushida on What Made WWE NXT Main Event Special, When He Thought About Retiring

Backstage News on The Diamond Mine Debuting In WWE NXT

The Diamond Mine Arrives on Tonight’s WWE NXT

Backstage News on WWE’s New Plans for the Cruiserweight Division

Lio Rush Says He Hopes To Become An MLW Regular, On His Relationship With Court Bauer