by Marc Middleton
in WWE News, WWE Rumors and Spoilers
A A
48
20.4k
VIEWS
Share on FacebookShare on Twitter

It looks like WWE is in the process of shutting down Twitch & Mixer streaming channels owned by several Superstars. Cameo accounts are also being deactivated.

AJ Styles took to Discord this afternoon and announced that he was suspending his “Stylesclash” accounts on Mixer and Twitch due to WWE’s new policy on unauthorized third party platform activity. Styles thanked his fans for the support and memories. He also said he will be leaving his Discord server up to keep in touch with fans for future happenings.

“@everyone, I want to thank you for all the greatest memories on Mixer and Twitch,” AJ wrote. “I will cherish these memories and I love everyone of you that have made this possible and supported me. As many of you know WWE is making some changes that involve streaming. We will see what the future holds in that regard.

“With that being said I will be suspending Stylesclash stream. This isn’t good bye, but this is see you sometime in the future. We will leave discord open, but since it won’t be monitored we will be making changes. Chris or I will let you know what that looks like once we figure it out. If you see me at the arenas or wherever be sure to let me know you’re part of the phenomenal family. Again this isn’t the end it’s just a pause. Thank you again for your support.”

Mia Yim (Reckoning of RETRIBUTION) announced on Twitter that her “ItsMeSYB” Twitch stream is also being pulled down, right before her scheduled gameplay with Jessamyn Duke.

“Sorry guys, no more stream for the time being. Thank you for making these past few difficult months manageable. It’s not goodbye, it’s see you later. [blue heart emoji],” Yim wrote.

Cesaro announced that he was suspending his “Claudio’s Cafe” channel on Twitch today during a stream.

Paige got emotional during one of her Twitch streams this afternoon on her “Saraya Official” channel after finding out about co-workers shutting down their platforms.

Paige continued texting, apparently with co-workers on her phone, and came back to the camera. She was more emotional as she went back to addressing her viewers. She then commented that she “cannot deal” with WWE anymore. She also blamed the company for over-working her, to the point that she suffered the career-ending neck injury during a WWE live event match in December 2017.

“I’ve honestly got to the point where I cannot deal with this company anymore,” Paige said. “So now I have to make a very important decision. I’m fucking tired, man. I broke my fucking neck twice, twice for this company, over fucking worked. I broke my neck twice for this company and all I wanted was to… they don’t realize that this community isn’t just about fucking subs. It isn’t about that. It isn’t about that. We built a wonderful community, a wonderful fucking family where this is an escape for a lot of people, including myself.

Paige continued and wondered why WWE is taking away her platform while she just sits at home, unable to wrestle.

“And I understand,” Paige said. “I understand if they’re like, ‘Hey, if you’re wrestling every day, if you’re doing shows every day, if you’re on TV constantly.’ That’s fine, but I’m a fucking injured wrestler. I can’t wrestle anymore. I get used for media stuff sometimes, you know? But at the end of the day I’m in my fucking house. I’m going fucking crazy, dude. I need something to keep me sane, man, and Twitch was my escape from that, you know? Right now I’m just sitting on my fucking ass.”

Paige also brought up her private photos & videos that were leaked on the internet a few years ago, and her failed drug tests, and relationship with former WWE Champion Alberto Del Rio. She also accused WWE of treating her bad.

“I had a terrible couple of years where I had tapes leaked about me, where I popped a couple of drug tests because I was in an abusive fucking relationship, dude,” Paige said. “And that’s the only thing I could fucking do. See, people think I should be thankful that I still have a fucking job, right? And I am, but it doesn’t mean I should be treated like fucking shit.”

Paige said at one point that she would keep streaming because her neck was taken away twice and she won’t allow WWE to take away her Twitch next. She also mentioned potential unionization in pro wrestling, revealing that she’s been in touch with a unionization lawyer.

“This is bigger than Twitch, it’s about taking fucking control of your own life and not being controlled by anyone. I gave ten years, man. I poured my fucking heart and soul into this. I had a bad couple of years like every motherfucker has. I’m not the only one who is fucking controversial around here, I’m not the only one. It’s fucking louder when it comes to me because I’m a fucking female. I hate using that because I’m a woman but it’s because I’m a woman and women don’t usually stand up for themselves.”

Paige went on and said she will continue to stream for her fans, and see how the situation plays out. Paige said she loves WWE but doesn’t agree with what is being done in regards to the third party activity. She noted that she understands that this is a business decision, and nothing personal, but she still doesn’t have to agree with it. She also noted that she felt sad at first, but now she feels empowered after speaking out on the latest stream. She told fans that she will be speaking out with more of what’s on her mind over the next couple of days.

WWE couple Zelina Vega and Aleister Black also discussed the situation on their “AtoZ” Twitch channel. They reiterated that they are not 100% sure of what will happen to the account as they have not talked to “the office” but they know there will be a conversation on the matter at SmackDown on Friday.

“In all fairness, we don’t know,” Black said. “We don’t know but it’s starting to look like, obviously that this might be the last one for a while. We haven’t been told anything, but obviously tomorrow is TV, and I know that there’s going to be a conversation tomorrow. But, like, it’s not definite, it’s not like this is the last final stream ever.”

Vega added, “Although it could be. I want you to be prepared for that, too.”

Black continued, “It could be but we don’t think it is, but you never know. I think what’s happening is they’re trying to find a way to make it coexist within the WWE Universe and whatever way that they want to do that, I don’t know, and if we agree to that, I don’t know. I literally can’t tell you anything because we don’t know anything.”

“Only because we haven’t been told anything from the office,” Vega added.

Black and Vega acknowledged the statements by Styles and Yim, and said they made those because they were told separately. Vega said it’s their business and she’s not sure if Yim and Styles have had conversations with the office, but she and Black have not.

“I think you can definitely say this is the last one for a while, for at least a while, and I don’t know how long that while is. Obviously tomorrow [at SmackDown] we’re going to get a little more clarity on things, but I don’t know,” Black said.

Like Styles, Black and Vega plan to keep their Discord server open so they can interact with fans.

“I’m just going to be candid,” Vega said. “And just like, we don’t know but we have a good idea, and there’s the whole ‘trying to make it work for everybody’ stage that we’re in right now, and we’re hoping that there is some kind of middle ground. Is there? There may not be because the thing is, that sounds great, you know? And I hope there is. It sounds like middle ground would be awesome, but I also want to prepare people.”

She added, “Because I don’t want to give you guys hope and then slap you guys in the face and go, ‘Sorry!’ You know what I mean?”

“We’re preparing you for both,” Vega said. “We’re preparing you for the, ‘Hey we figured out something and it’s kind of going to be different and it’s going to work somehow.’ But it’s not going to be exactly what this is because I don’t think it’ll ever be this, it’ll be different if there is that, but there’s also the side of, ‘We just have to stop.’ I want you guys to be prepared for both. I just want to be 100% honest with you.”

Black and Vega acknowledged Paige being upfront and honest with her viewers, and not holding anything back. Vega recalled how Paige also said officials have not said anything concrete to her either, but Vega is sure something will happen to the third party activity. Black and Vega also commented on how they built their platform together, with the fans, despite Black being a very private person.

On a related note, several WWE Superstars have deactivated their Cameo accounts as well, and are no longer taking requests from fans. RSN discovered that Big E, Riddle, Kevin Owens and others have all deactivated their Cameo accounts, which were big earners for some wrestlers. There are some WWE Superstars who remain on Cameo, such as Lacey Evans and Mandy Rose, among others. It remains to be seen if their accounts will be deactivated soon like the others.

You can click here and click here to read some of our backstage reports on WWE Chairman & CEO Vince McMahon, and the new third party policy.

Stay tuned for more on WWE’s policy on third party platform activity. As Black and Vega noted, more information may be available after talents talk with officials at the SmackDown taping on Friday.

You can see a screenshot of AJ’s message below, along with Yim’s tweet. 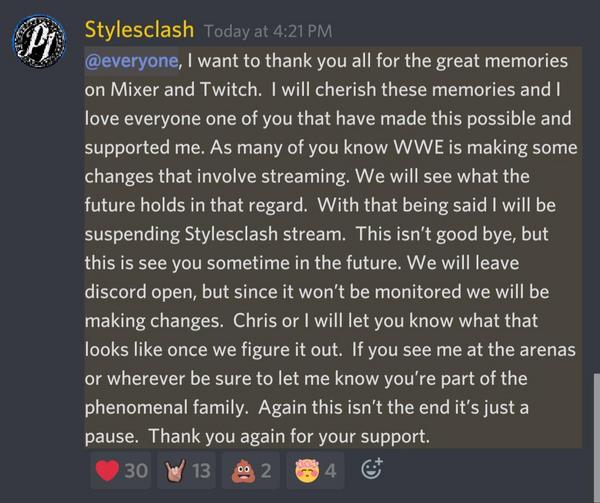 Sorry guys, no more stream for the time being. Thank you for making these past few difficult months manageable. It’s not goodbye, it’s see you later. 💙 https://t.co/9XHbOikGLL

The Bunny On Getting To Work With The Blade

Roman Reigns Retains Inside Hell In a Cell, Storyline Updates on Dominik Mysterio and The Usos

Possible Spoiler on a Major WWE SmackDown Appearance for Tonight

Jim Ross On Working With Paul Heyman On Commentary