WWE Tribute To The Troops 2018 Results

by Joshua Lopez
in RESULTS
A A
0 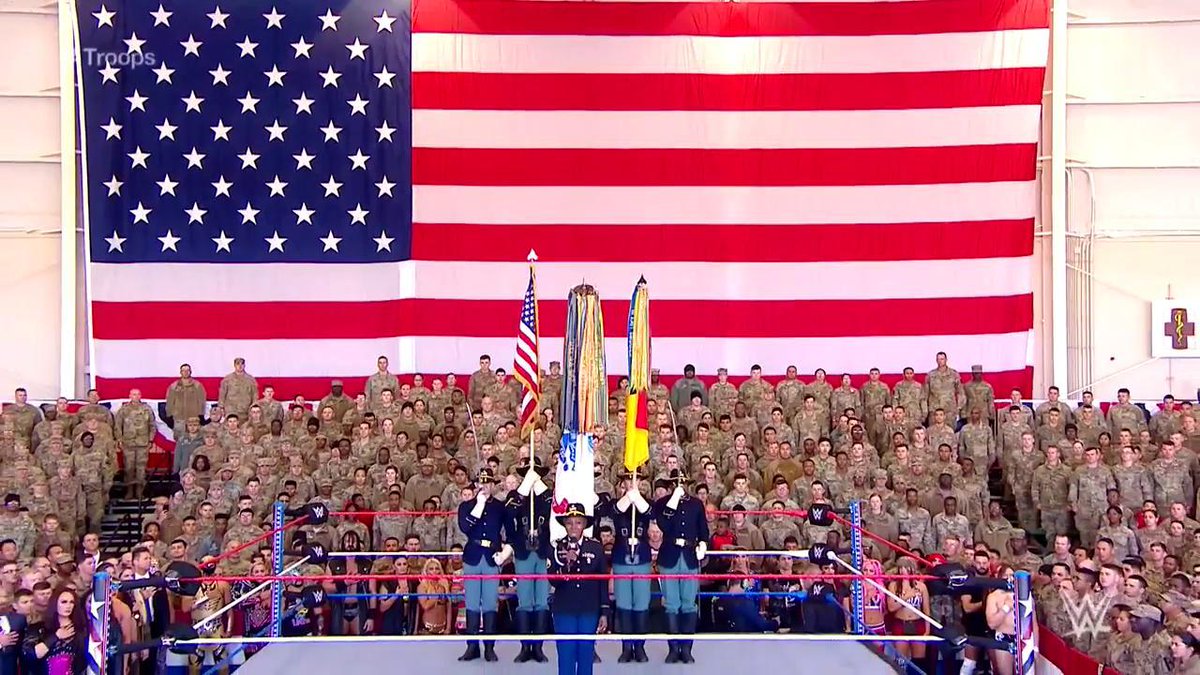 – The New Day, R-Truth and Carmella are handing out gifts to the troops.

.@RondaRousey absolutely means BUSINESS in the #TripleThreat #TagTeamMatch at #WWE Tribute to the #Troops! pic.twitter.com/5MkkBOXAH3

Rousey and Sarah Logan will start things off. Collar and Elbow Tie Up. Rousey pulls Logan down to the mat. Logan tags in Morgan. Rousey with a Judo Throw. Rousey tags in Natalya. Double Vertical Suplex for a one count. Natalya applies a waist lock. Morgan with a back elbow smash. Morgan whips Natalya to the corner. Natalya with a SlingShot Atomic Drop. Natalya follows that with a Basement Dropkick. Natalya with a Discus Lariat. Morgan fights out of The SharpShooter. Morgan tags in Tamina. Tamina applies a wrist lock. Tamina pulls Natalya down to the mat. Natalya side steps Tamina into the turnbuckles. Natalya rolls Tamina over for a two count. Natalya applies a waist lock. Tamina tags in Jax.

Logan mocks Rousey. Logan applies a cobra clutch. Natalya with an arm-drag takeover. Logan dropkicks Natalya for a two count. Logan repeatedly stomps on Natalya’s chest. Riott Squad are cutting the ring in half. Natalya knocks Morgan off the ring apron. Natalya breaks free and tags in Rousey. Rousey clotheslines Logan. Rousey with Two Judo Throws. Rousey is with a flurry of jabs. Natalya drops Tamina with a Discus Lariat. Jax goes for a Samoan Drop, but Natalya lands back on her feet. Natalya sends Jax shoulder first into the steel ring post. Ruby Riott is running interference. Morgan attacks Rousey from behind. Rousey makes The Riott Squad tap to a Double Arm-Bar.

– Comedian Jon Stewart pays a visit to the troops.

– Country Artist Morgan Wallen performs his hit singles Whiskey Glasses and Up Down.

.@DMcIntyreWWE & @fightbobby look to be in complete control of @IAmEliasWWE & @FinnBalor at #WWE Tribute to the #Troops! pic.twitter.com/f393MuhDb5

Lashley and Elias will start things off. Lashley knocks Balor off the ring apron. Lashley drives Elias back first into the turnbuckles. Lashley with clubbing shoulder blocks. Lashley tags in McIntyre. McIntyre and Lashley are double teaming Elias. McIntyre with a clubbing blow to the back of Elias. Elias throws Lashley out of the ring. Elias ducks a clothesline from McIntyre. Elias tags in Balor. Balor with Two Running Forearm Smashes. Balor goes for a single leg takedown, but McIntyre blocks it. McIntyre goes for a GutWrench PowerBomb, but Balor lands back on his feet. Balor knocks Lashley off the ring apron. McIntyre attacks Balor from behind.

McIntyre with a Delayed Vertical Suplex for a two count. McIntyre stomps on the left hand of Balor. McIntyre and Lashley are cutting the ring in half. Lashley punches Balor in the gut. Lashley applies a rear chin lock. Balor gets back to a vertical base. Balor is inches away from Elias. Balor kicks Lashley in the jaw. Lashley dumps Balor in the corner. Lashley flexes his muscles. Balor side steps Lashley into the turnbuckles. McIntyre pulls Elias off the ring apron. Lashley with a Corner Spear. Lashley tags in McIntyre. McIntyre with a Tilt-A-Whirl BackBreaker for a two count.

On behalf of the @WWEUniverse, we say THANK YOU to the brave men and women of the armed forces! #Troops @fightbobby @SashaBanksWWE @itsBayleyWWE pic.twitter.com/wSdz39WLKC

#JonStewart describes a combat landing as “maybe the scariest thing he’s ever done” at #WWE Tribute to the #Troops. pic.twitter.com/VsOOe2aV82

What a matchup! @WWEDanielBryan & @TheDeanAmbrose look to be taking control of their matchup with @AJStylesOrg & @WWERollins at #WWE Tribute to the #Troops! pic.twitter.com/686rcIUKps

Ambrose attacks Rollins from behind before the bell rings. We have ourself a pier six brawl. Styles repeatedly stomps on Bryan’s chest. Rollins throws Ambrose out of the ring. Styles with a Sliding Knee Strike. Rollins follows that with a SlingShot Crossbody Block. Rollins throw his t-shirt into the crowd. Knife Edge Chop Exchange. Rollins thrust kicks the midsection of Ambrose. Rollins kicks Ambrose in the face. Rollins ducks a clothesline from Ambrose. Rollins hits The SlingBlade. Rollins is burning it down. Rollins delivers another thrust kick. Bryan trips Rollins from the outside. This allows Ambrose to build momentum during the commercial break.

Ambrose applies a fujiwara arm-bar. Rollins is throwing forearms at Ambrose. Ambrose whips Rollins back first across the turnbuckles. Ambrose with a Wicked Clothesline for a two count. Ambrose places Rollins on the top turnbuckle. Ambrose goes for a SuperPlex, but Rollins blocks it. Rollins HeadButts Ambrose. Rollins BuckleBombs Ambrose. Styles and Bryan are tagged in. Styles ducks a clothesline from Bryan. Styles with The Phenomenal Blitz. Styles leapfrogs over Bryan. Styles dropkicks Bryan. Styles follows that with a Basement Forearm Smash. Styles with a Jumping Corner Clothesline. Styles hits The Ushigoroshi for a two count.

Styles goes for The Styles Clash, but Bryan lands back on his feet. Bryan with a Step Up Enzuigiri. Bryan goes for a Corner Dropkick, but Styles counters with The Calf Crusher. Ambrose breaks the submission attempt. Rollins with a SpringBoard Clothesline. Rollins starts teeing off on Ambrose. Bryan attacks Rollins from behind. Rollins negates The Dirty Deeds. Bryan inadvertently clocks Ambrose with a Corner Dropkick. Rollins SuperKicks Bryan. Styles clotheslines Ambrose over the top rope. Rollins lands a Suicide Dive. Styles connects with The Phenomenal Forearm to pickup the victory.

"You guys are the TRUE warriors, the TRUE heroes, and we THANK YOU!" – @WWERollins #Troops @AJStylesOrg pic.twitter.com/pzdHfweKcZ

Check Out Episode 136 of The Hoots Podcast

Dolph Ziggler Discusses How Much Longer He Plans To Wrestle: “It Really Depends”

Backstage Updates on Plans for Karrion Kross and Scarlett In WWE

Daniel Garcia: ‘I’ve Been The MVP Over The Past Year In AEW’