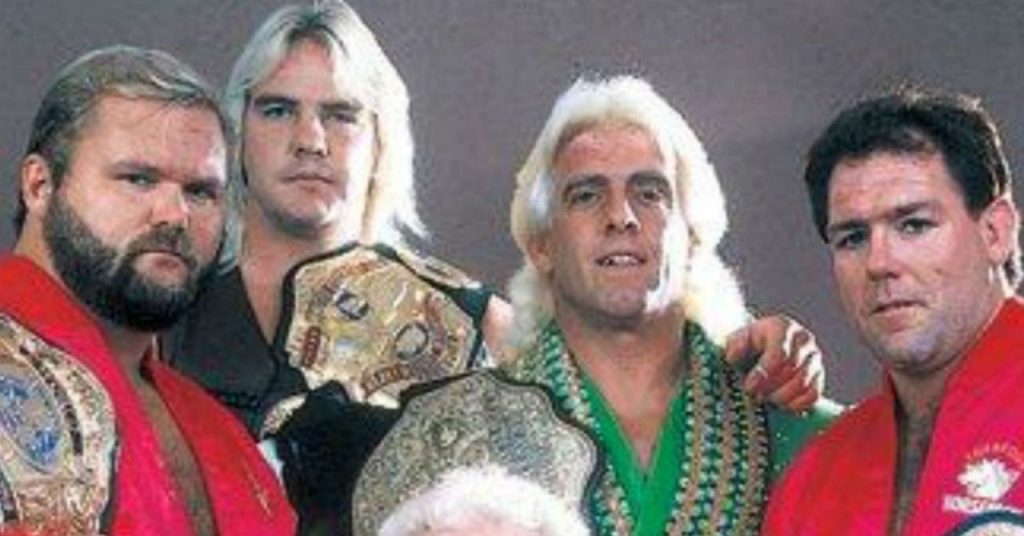 When you think of tag team wrestling, many great teams come to mind- The Midnight Express, The Road Warriors, Freebirds, etc. But when you think of team legacies, only one group stands the test of time- The Four Horsemen. The Horsemen transcended the definition of a tag-team. They were much more than two guys going into the ring and taking care of business. They became iconic, legendary, and in the eyes of some, immortal.

I started watching professional wrestling when I was about 8 or 9 years old with my Dad. All that was available to us early on was the WWF. A few years after I was inducted into the world of wrestling, the NWA became available in our area. One of my first memories of the NWA was seeing this brash young man in a three piece suit, wearing sunglasses, sporting long flowing blond hair. That was my first introduction to Ric Flair. He was carrying the NWA World Heavyweight Championship and talking about being the “wheelin dealin, kiss stealin, limousine riding, jet flying son of a gun”. Beside him stood men I would soon come to know as Tully Blanchard, Arn Anderson, Ole Anderson, and their manager J.J. Dillon. They held up hands in unison, four fingers strong, and my world was forever changed.

The WWF became an afterthought for a while, as I was transfixed by this new, raw wrestling I was seeing in the NWA. There wasn’t anything like the Four Horsemen in the WWF, and I would come to find out later, that there really wasn’t anything like the Four Horsemen anywhere in wrestling. They cemented themselves in the annals of wrestling history as one of the most dangerous and successful groups ever to step foot in the squared circle. I watched as Ole Anderson was removed from the group and replaced by the young upstart Lex Luger, and I watched again when Ric, Arn and Tully kicked Luger to the curb. That’s the thing about the Horsemen- they were never afraid to cut off one of their heads for the betterment of the group.

It was at this time, that my favorite incarnation of the Four Horsemen was born. After Luger was kicked out, he teamed with Barry Windham, and eventually won the NWA Tag Team Titles from Arn and Tully, but during a rematch, Windham turned on his partner and became the 4th member of the Horsemen, once again making the group whole. They took complete control of the NWA, carrying all the major championships. Ric Flair continued to be World Champion, Arn and Tully had regained the Tag Team Titles, and Barry Windham captured the United States Heavyweight Championship.

I attended the 1988 Great American Bash at the Baltimore Arena, and had the privilege of seeing the Four Horsemen in action. Arn and Tully wrestled Sting and Nikita Koloff to a time-limit draw, retaining their tag titles. Barry Windham defeated his mentor Dusty Rhodes with the assistance of Ronnie Garvin to retain his US Title. Ric Flair defeated Lex Luger, while in the torture rack as the state athletic commission stopped the match due to Luger bleeding. You see, that was the beauty of the Four Horsemen. They took whatever advantage they could get in order to be successful. In none of those matches did they score a clean victory. They would get counted out, get DQ’d, and pay off people to assist them in order to come out on top… and the fans absolutely hated them for it. Nobody did it better- nobody!

The Four Horsemen lineup changed many times throughout the years, but the philosophy of the group remained the same- do whatever it takes to get on top. The Four Horsemen continue to influence professional wrestling even today. The formation of Evolution in the WWE was an homage to the Four Horsemen, with Triple H, Randy Orton, Batista, and Ric Flair filling out the group. They did in the WWE what the Horsemen did in the NWA- they took over. TNA put their own spin on the Horsemen philosophy when they formed Fortune. For as long as professional wrestling exists, the Four Horsemen will continue to be a vital part of its history and its future. So when someone comes up to you holding four fingers up high, make sure you flash them right back and let out a loud “Woooo”.

I am privileged and honored to be able to induct The Four Horsemen into the Lords of Pain Hall of Fame Class of 2013. Long may they ride!