Inducted by The Doc 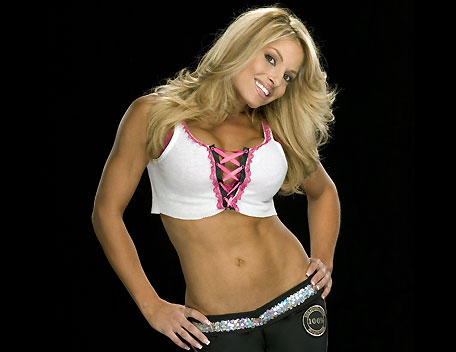 I know it may be controversial to start a celebration of someone’s career by tearing down the very aspect of the show that our next inductee was a part of, but I feel that I need to be honest to properly set the stage.

For my twenty-six years of being a professional wrestling fan, there has never been a component of the programming that I liked less than the women’s division. However, there was a short period of time when I was made to care by one of the most gifted personalities that the WWE has ever known.

As much as I abhor women’s wrestling, I absolutely adore Trish Stratus. My readers know that I have a tendency to hyperbolize, but I am not joking when I state that she was one of the best all-around performers of the last decade. In the book that I am currently writing on the Wrestlemania Era, she is the only female that I included in the pantheon of all-time greats. What she brought to the table on the microphone, in backstage segments, and in the ring was second to none amongst her gender and only behind a very elite few of the guys. In the next few paragraphs, expect to see the word history used time and time again because Trish Stratus made history.

When we were conducting the Hall of Fame balloting, I was openly rooting for Trish to win her very tight race with Moolah. Trish deserved to be the woman inducted into our first class, I thought. The Fabulous One can have her turn in the next. No offense to Moolah, but as important as she was to women’s wrestling, Trish equals her impact. When she came into the WWE, all the ladies were doing is taking their clothes off. As much as I enjoyed watching these buxom beauties showing their skin as a teenage male during the Attitude era, I cannot imagine what it must have been like for a seemingly wholesome, intelligent fitness model when she walked in and was expected to continue WWE’s take on “Girls Gone Wild.” What she proceeded to do in the years that followed was one of the single most underrated feats of the last decade in sports entertainment, as she grabbed the perception of women amongst the fanbase by the foundation and pulled it up with all her might to a level of respectability that it had not experienced in modern times.

With a couple of years of training and unbridled passion, Trish made the women’s division relevant. She was everything that the WWE wanted in the newly defined “Diva”; she was gorgeous, athletic, and a good spokeswoman for the company. Yet, by the end of 2002, she was also becoming a more than serviceable professional in all the realms that matter to wrestling critics. Her match with Victoria at Survivor Series 2002 was as physically taxing a contest between the ladies as had been seen in a very long time. Though not perfect, the bout held in front of the Madison Square Garden faithful that will applaud her into the WWE Hall of Fame this weekend earned her the respect of a lot of fans that had previously used her work as a bathroom break.

Two years later, in the same building for Wrestlemania XX, she made the heel turn that would be the turning point of her career. In creating a new hook moving forward in the love triangle situation also involving Chris Jericho and Christian, Trish elevated herself higher than any female since Moolah. As good as Captain Charisma played his role, he was overshadowed by his new, wonderfully mischievous girlfriend. After capturing the Women’s Championship in the summer of 2004 to become the first to ever reach five title reigns in the division, her feud with Lita took center stage and became a multi-PPV headlining storyline. Less than five years prior, the only way that the WWE could get a woman to draw money on a PPV was to tease that she would go topless. People were paying to see Trish vs. Lita in a standard wrestling match.

Stratus vs. Lita was the first and only Women’s Championship match to occupy a main-event on Raw. It was named the #16 match in Raw’s 20 year history earlier this year, not because the WWE felt they needed to get a women’s match on their list, but because Trish and Lita had definitively earned their stripes based on the story that they had built and the execution of their payoff. As Lita was still one of the most popular females in wrestling history circa December 2004, Trish dropping the title to her in the 12/6/04 Raw final segment is debatably the greatest moment in women’s wrestling over the last thirty years and maybe ever.

Trish, as a character, had a delivery during interviews that no other woman can approach. She is the only woman in WWE history who instilled in the company such confidence that they gave her a live microphone on the flagship brand and let her talk for ten minutes, as was the case throughout 2004 and 2005. She was as entertaining during that stretch as a leading antagonist as anyone in the WWE. In that same time frame, she rounded into a compelling storyteller in between the ropes, creating for situations that would have typically been eyesores (i.e. her Wrestlemania 21 match) becoming instances when you sat back, watched intently, and said to yourself, “Trish has got this.” She does not get nearly the credit that she deserves for that quality. Few superstars in wrestling lore have been capable of carrying supremely lesser talents to memorable outings and she was one of them. One could argue that the gap in the level of ability in Trish’s division between her and the average was wider than any male wrestler ever had to deal with. Does that not set her apart? Does that not, when taken into proper context, put her on more of a level playing field with her Y-chromosomal peers? I believe that it does.

Six months later, having accomplished more in a male-dominated sport than any woman before her, she retired in a match against Lita, reclaiming the Women’s title for a record seventh and final time in front of her hometown, Toronto, Ontario, Canada crowd. She received a standing ovation from the live audience, as Jim Ross proclaimed for the millions watching around the world that she was “the greatest women’s champion of all-time.”

So, it is a great honor for me to officially induct Trish Stratus as the first female in the very first Hall of Fame class in LOP history.

Related Links: Trish Stratus Says She Is Always Ready To Return To The Ring, Talks Old Offer From TNA, Thoughts On Lita and Steve Austin Back In WWE
Trish Stratus Talks The Potential Of A Final Title Run In WWE: “Maybe If The Opponent Was Perfect”
LOP/WH Hall of Fame 2013