Home » News » WWE News, WWE Rumors and Spoilers » CM Punk on Why He’s Not Selling His Ring-Worn Trunks to Some “Weirdo Fanboy”, His Heels Character, More

CM Punk on Why He’s Not Selling His Ring-Worn Trunks to Some “Weirdo Fanboy”, His Heels Character, More

CM Punk’s “Ricky Rabies” character will debut on the third episode of “Heels” on Starz. The series will premiere on Sunday, August 15. Ricky’s valet, Vicky Rabies, is played by actress Bonnie Somerville, and it looks like they have a younger member of their group, as seen in the photo below.

Punk recently spoke with Bill Pritchard of WrestleZone and revealed that he has a time-lapse video he will be releasing on social media soon, which shows him getting into makeup and costume for the Ricky character, which included having his tattoos covered up. Punk noted that show writer Michael Waldron came up with the character, but he was able to channel other wrestling stars and then add his own spin to the character.

Punk said he was able to pay homage to some people from his career with the character, and noted that fans will notice “little Easter eggs here and there.”

“I showed up and saw that outfit and everything else and I was kinda given free rein to figure out who Ricky Rabies was, where he was from,” Punk said. “And really what I was thrilled about was, I could get to do a little love letter, an homage to some people in my wrestling career that I shared locker rooms with and helped me out.

“The big one—I don’t even want to say who it is. I want people to watch this show and watch Ricky Rabies, and they’ll be able to figure it out. I peppered it in with little Easter eggs here and there, so if you’re a hardcore wrestling fan,” he noted, “you know what to look for. You’re going to be ‘tickled pink’ by Ricky Rabies.”

It was recently reported that Punk was in great ring shape for the in-ring work on the “Heels” set. He was asked about possibly taking a different approach to training for the show, compared to a full-time return to the ring. He talked about how he maybe would’ve gotten more out of shape to portray Ricky as a typical Southern wrestler, and also praised the rest of the cast.

“I’ll spotlight everybody else before I’ll spotlight me, but I mean, I still train. I work out every day, so it’s not like needed to quote-unquote ‘get in shape’ to be Ricky Rabies,” Punk said. “Again, if anything, if I had the time, I would have gotten more out of shape to be Ricky Rabies, you know what I mean? To be a Tommy Rich, there’s a million different guys that came out of Memphis that were my inspiration for Ricky Rabies, and none of them ever had abs or giant pecs or anything like that. He’s your typical, Southern wrestler. He can be a bad guy, he can be a babyface, but everybody on their show busted their ass, and I’m talking lifting weights, doing cardio, getting into physical shape, but also in the ring.

“Everybody would be doing rolls, taking bumps, running the ropes. Everybody worked really, really hard. Chris Bauer, Kelly Berglund, Robby Ramos… James Harrison (Apocalypse), here’s a freak athlete who, I watched him pick up stuff and I watched him do stuff that a lot of pro wrestlers couldn’t do, but this dude was doing it effortlessly. Everybody is really putting the ring time in to really respect pro wrestling, and I think that’ll come across when fans watch the show.”

“I kind of am. I definitely feel like as I get older I’m more of a memorabilia guy, but memorabilia gets fucking expensive for the stuff that I like,” Punk said. “I want horror movie props. I just never sold any of my gear because I think that’s strange. I don’t want somebody… I mean, I wore trunks, essentially underwear, right? I’m not selling my Speedo to some weirdo fanboy on the internet, I don’t care how much money they’re offering because I just feel weird about that.

“I have everything from my career. I may or may not have a few things of Ricky Rabies. I’ll just say allegedly, maybe I have a rat or two, and you gotta wait and see the show to know what I’m talking about, but I do have a Ricky Rabies shirt that the crew graciously gave me, and I wear it proudly, and I got some Ricky Rabies stickers because Ricky was a big merch guy. He was selling stickers and t-shirts at intermission.”

Punk also noted that the “Heels” crew is hoping to get picked up for a season two.

Stay tuned for more from Punk and more on the “Heels” show. Below is the aforementioned photo: 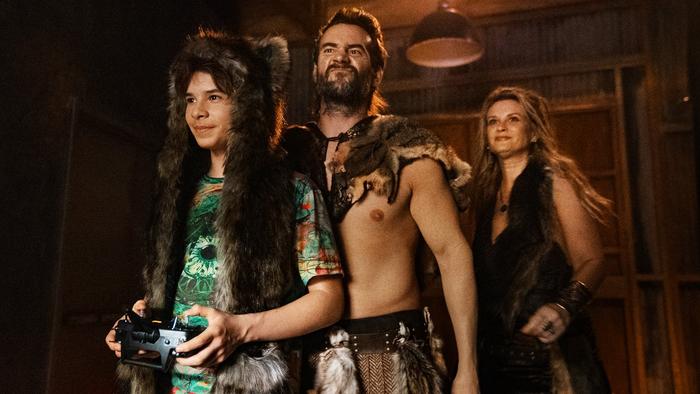