by LWO4Life
in El Gringo Loco
A A
7

The opening rifts of Iron Man boom on the sound system. Out walk two MASSIVE men in leather vest covered in spikes, spiked dog collars, face paint, and they have huge muscles. From the first time I saw them on AWA TV in early-1986, I couldn’t help but be in awe of them. Hawk was slightly smaller, but he was still a massive man, and he picked grown men up over his head like they were toddlers. Animal was bigger, the powerhouse of the team; and that’s saying something. Together they seemed unbeatable.

I remember my mom taking me to a place called Pick ‘N’ Save in California; it was there I saw the Road Warriors action figures for the AWA. I wanted them so badly. It was the first time I was drawn to something that was not in the WWF. My 5-year old brain couldn’t help but see them as different from the cartoon WWF, and somehow that made them cool.

I do want to point that in 1983 Hulk Hogan left the AWA. When telling the story of the AWA, many contribute this to the downfall of the promotion. But in 1984, the Road Warriors arrived from their time in George Championship Wrestling. From 1984 to 1986 the Road Warriors would become the biggest act in the AWA, drawing huge houses across the territory. Proving themselves in two territories, it was only a matter of time before Vince came calling. When the Road Warriors turned down the WWF, Vince would try to duplicate the success of the Road Warriors. From signing the original Road Warrior copies in the Powers of Pain, to creating Demolition, it felt like WWF wanted to capitalize off this great team. 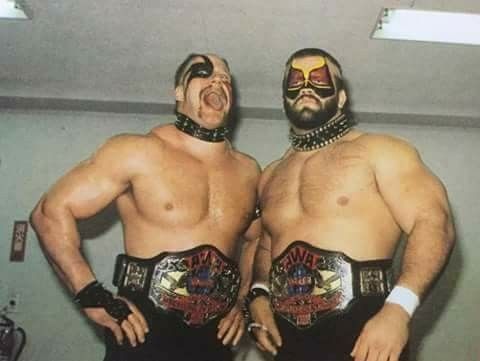 How the Team Functioned

During the first run of the Road Warriors, Paul Ellering was critical to the success of the team. When Ole Anderson teamed Hawk and Animal, both were very green. Though both had huge main event potential, it would be a while to get them ready for that spot. Ellering was key because he was the veteran presents which could keep the team grounded. He acted as a true manager, booking the flights, helping with bookings, and helping the team manager their money. Ellering would bring the Road Warriors into his short lived faction called the Legion of Doom. Soon the faction was gone, but the Road Warriors and Ellering pairing continued.

Ellering’s teachings would help Animal the most. Though Ellering would be with the Road Warriors in the AWA, GCW, and Jim Crockett Promotions, it would be in WWF that saw him separate from the team. By the time the WWF run started, Animal had taken over much of the duties. Unfortunately, Hawk enjoying the life of the 80’s and early 90’s. It would take Animal to keep the team intact.

Their runs in the AWA and JCP proved they drew money. But by the time their WWF run happened, the Road Warriors (now named Legion of Doom) joined the circus rather than headlined territories. In 1992, the team wrestled it’s final match of their original run at Wembley Stadium in England for Summer Slam. Once Hawk went AWOL after Summer Slam, it was up to Animal to fulfil all the advertised dates by himself.

Because Hawk was AWOL, Animal exposed himself to injury by wrestling the dates scheduled. And hurt himself he did. Animal suffered an injured back, which stopped his wrestling career for 4 years. I can say that people I knew in college here in Minnesota reported seeing Animal at his children’s games. As one of my friends put it, “you are a kid, and you look up at this huge man watching Little League.”

I am not sure if this time off helped Animal or not, but it did seem to push Hawk deeper into his problems he had with the party life. Hawk was now in Japan, creating different Road Warrior teams and trying to capture his past glory. And to be honest, he was succeeding. The Hell Raisers in Japan were one of the best tag teams of that era, and Hawk even won a world title in Europe. But at what cost to his body and mentality. Animal on the other hand had been resting. Enjoying his time with his family, collecting Lloyds of London checks like a few other Minnesota wrestlers at the exact same time. Animal also invested in Zubaz pants, a brand which the Road Warriors helped popularize in the wrestling locker rooms in the late 80’s.

This time would help Animal extend his career, as he seemed to have a much healthier lifestyle and appeared to have grounded himself as the late-90’s approach. In 1996, he was able to make his in-ring comeback and team with Hawk once again in WCW. It was one of my favorite looks of the Road Warriors, as they wore blue for the occasion.  Eventually they’d leave WCW, as their gimmick would seem to not fit in nWo/WCW. In a time when you need the faces to sell more, big super faces that were unbeatable just didn’t fit the storyline. 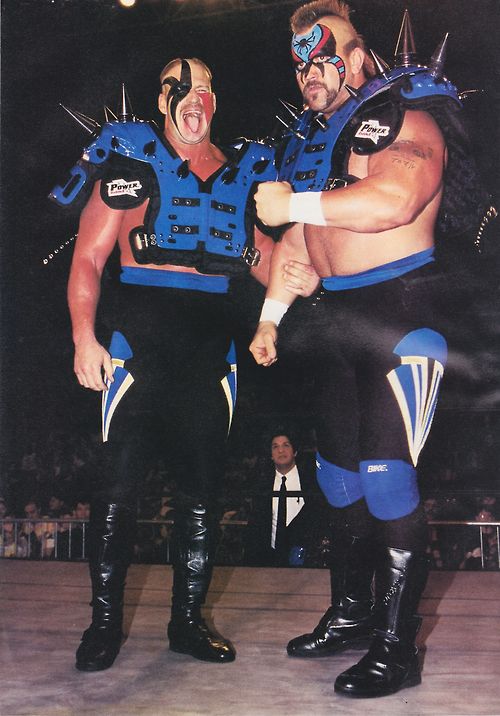 The Legion of Doom came back to WWF. The last time they went by Legion of Doom because of the Ultimate Warrior. This time they kept LOD because the WWF audience was conditioned to chanting the initials. I honestly wanted them to go back to Road Warriors, and Vince McMahon himself even accidently said the Road Warriors on their debut. But it wasn’t to be. The fans wanted their LOD. With that said, 1997 was the last year of the Road Warriors as we knew and loved them. It felt like that was their comeback and good-bye tour all in one.

Like in their glory years in Jim Crockett Promotions, LOD found themselves battling factions as faced the Nation of Domination and the Hart Foundation. It was a match against the Hart Foundation that they’d earn their highest star rating since 1987 according to Dave Meltzer. Of course, they would find themselves with the WWF Tag Team championship. This would set up a passing of the torch to one of the next great tag teams, the New Age Outlaws. If you watch the match, you can see clearly in that match wrestling past and wrestling future.

The Road Warriors were so huge at one time they kept a dying promotion from collapse, they helped a regional promotion go national, and they finally ended their first run in the largest promotion and they sold out buildings everywhere. But their 1996-97 nostalgic tour showed just how out of place the Road Warriors were in the late-90’s. They wouldn’t have made sense in a WCW with the nWo, unless they found a way to make LOD underdogs, and it became clear in late 1997 that LOD wasn’t going to fit into the WWF Attitude Era. Time was not on their side.

How WWF Ruined the Road Warriors and Aftermath

We all know the story, Hawk gets drunk then climbs the Titantron. He then is pushed off and everyone is concern. A storyline so bad that no one remembers the payoff. Maybe Vince McMahon was bored of the Road Warriors, or maybe Vince Russo convinced Vince that this was the best course of action. Whatever the reason, this story ruined the Road Warriors and smeared shit all over the business.

Eventually the Road Warriors went to the scene of their greatest success, Japan. From 1999 to 2003 they’d stay in Japan, with a TNA and WWE nostalgia appearance before Hawk’s untimely death. From there it was on Animal to carry on the tradition. Having multiple partners, including Hawks old partner Power Warrior, Animal was able to keep the Road Warriors memory alive for many years.

It’s hard to understand how transcending the Road Warriors were in wrestling. Without question a trailblazing team in the 80’s, they fit so perfectly in a culture producing Mad Maxx, Terminator, Rocky 4, and Bloodsport. As the Cold War heated up in the 80’s, we wanted our heroes to be bigger and tougher than ever. We needed our heroes to be invincible. It’s why no matter how much the Road Warriors fit the traditional heel troupe; people cheered them. American culture may have cheered on an underdog Rocky in the 70’s, but by the 80’s they wanted a steroid pumped Rocky to beat that Russian’s ass.

But great times couldn’t last forever. Starting in the 90’s, we grew tired of Superman always winning. It’s why we booed John Cena, and why Roman Reigns was never accepted. But you can only be a product of the time you are in. It’s unfair to place an act from the past and ask how they’d do today.

With that in mind, the Road Warriors must be the tag team Hulk Hogan. The highest drawing tag team in history, they drew the majority of their money outside of the WWF machine. The closest team to them outside of WWF is the Rock N Rock Express, and that team was very regional. The Road Warriors drew in the AWA, JCP, WWF, Japan, and all over the world. If you have Hulk Hogan as your all-time greatest wrestler, then the Road Warriors are the greatest tag team.

Sadly, Road Warrior Animal passed away last week at the age of 60. His last tweet was a loving anniversary message to his wife, a small glimpse into his personal life and priorities. He would become the team’s manager when they separated from Paul Ellering and joined the WWF. He was the one who originally came up with the name Road Warriors, as his original gimmick name was the Road Warrior. Animal came up with so much of the Road Warrior gimmick that it was basically his.

While Hawk would be seen as the star of the group, Animal was the solid base, the one who kept it together. And his work now lives in wrestling immortality. When you talk about any great tag team, like the Dudley Boys, you compare them to the Road Warriors. And now Animal joins his partner in that great wrestling ring in the sky. Rest in Peace Animal, the legacy you left in the wrestling world is great. 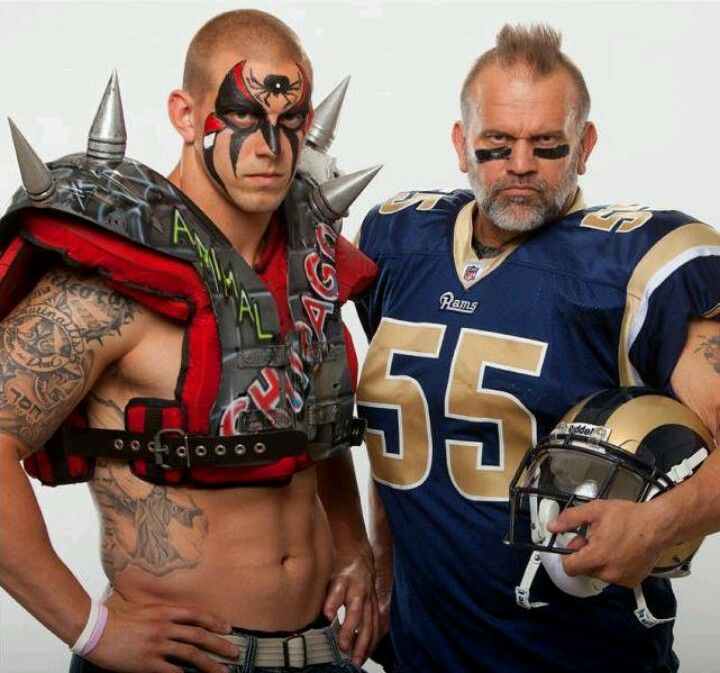 Sylvester Stallone Praises Pro Wrestling, Talks If Wrestling Is Real, Why He Made His Daughters Watch, More

Max Caster Says The Acclaimed Wants Rematches With FTR and The Young Bucks: “We’ve Improved So Much”