by Joshua Lopez
in RESULTS, IMPACT Wrestling Results
A A
0

– The winners of The Mash Up Tournament will fight each other at the Unbreakable Special on August 2nd. The winner of that match will have a future IMPACT World Title Opportunity.

Moose and Raju will start things off.  Raju tags in Deaner. Deaner plays to the crowd. Collar and Elbow Tie Up. Moose applies a side headlock. Moose tugs on Deaner’s hair. Deaner is throwing haymakers at Moose. Deaner tackles Moose. Deaner transitions into a ground and pound attack. Moose tags in Edwards. Deaner with a flurry of left jabs. Moose kicks Deaner in the back. Deaner knocks Moose off the ring apron. Edwards with Two OverHead Belly to Belly Suplex’s. Raju reverses out of the irish whip from Edwards. Singh trips Edwards from the outside. Raju with a Sliding Boot. Raju is mauling Edwards in the corner. Raju sends Edwards across the ring.

Edwards with a running forearm smash. Edwards follows that with an inverted atomic drop. Edwards delivers his combination offense. Raju tags in Deaner. Raju and Deaner goes for a Double Suplex, but Moose gets in the way. Moose with a double clothesline. Edwards shoves Moose. Moose with a Running Senton. Edwards hops on Moose’s back. Moose drops Raju with a Big Boot. Assisted Senton Splash. Deaner sends Moose tumbling to the floor. Deaner ducks a clothesline from Edwards. Deaner PowerSlams Edwards. Raju puts on Deaner’s hat. Raju mocks The Deaners. Moose nails Deaner with a Pump Kick. Moose HeadButts Raju. Edwards connects with The Boston Knee Party to pickup the victory.

After the match, The Deaners starts brawling with The Desi Hit Squad.

– Impact Wrestling will be a Southern California Tour in the beginning of August.

.@The_Ace_Austin has to find a new partner for #MashUp tonight and FAST!

Second Match: Rich Swann & Madman Fulton vs. Jake Crist & Zachary Wentz in a First Round Match In The Mash Up Tournament

Swann is trying to fire up Fulton before the bell rings. Fulton and Wentz will start things off. Wentz with two hamstring shots. Fulton launches Wentz across the ring. Wentz ducks a clothesline from Fulton. Wentz kicks Fulton in the face. Wentz with a Flying Hurricanrana. Fulton tags in Swann. Swann with a Tilt-A-Whirl HeadScissors TakeOver. Wentz goes for a Hurricanrana, but Swann lands back on his feet. Wentz delivers his combination offense. Crist unloads a flurry of kicks. Wentz and Crist poses for the crowd. Swann is throwing haymakers at Crist. Swann with a sunset flip for a two count. Crist drops Swann with a Big Boot. Crist hooks the leg for a two count. Crist is choking Swann with his boot. Crist slams Swann’s head on the top turnbuckle pad. Crist tags in Wentz.

Wentz with a Step Up Knee Strike. Following a snap mare takeover, Wentz hits The PK. Wentz with a Standing Shooting Star Press for a two count. Wentz locks in The Last Chancery. Swann is trying to build momentum. Swann nails Wentz with a HandSpring Cutter. Crist stops Swann in his tracks. Crist tags himself in. Crist applies a front face lock. Swann with rapid fire haymakers. Crist dodges The Spinning Heel Kick. Swann delivers another HandSpring Cutter. Swann tags in Fulton. Fulton knocks Wentz off the ring apron. Fulton tells Crist to get up. Fulton lays out Swann with Three ChokeSlams. Crist plants Swann with The Fisherman’s Buster to pickup the victory.

Third Match: Michael Elgin & Willie Mack vs. Ace Austin & Stone Rockwell in a First Round Match In The Mash Up Tournament

Elgin attacks Austin and Rockwell before the bell rings. Elgin blasts Austin with a knife edge chop. Elgin tags in Mack. Austin with an arm-drag takeover. Austin leapfrogs over Mack. Mack avoids two leg kicks from Austin. Mack with a Hurricanrana. Mack dropkicks Austin. Mack with a heavy chop. Mack sends Austin across the ring. Austin drop toe holds Mack to the canvas. Austin kicks Mack in the back. Austin with a basement dropkick. Austin follows that with a SpringBoard Enzuigiri. Austin throws his card at Rockwell. Mack hits The Samoan Drop. Mack nips up. Mack with a Standing MoonSault for a two count.

Mack PowerSlams Austin. Mack tags in Elgin. Elgin with a SlingShot Splash. Elgin bocks a boot from Austin. Standing Switch Exchange. Elgin goes for a Belly to Back Suplex, but Austin lands back on his feet. Elgin SuperKicks Austin. Elgin with a Step Up Enzuigiri. Austin negates The Elgin Bomb. Austin tags in Rockwell. Elgin brings Rockwell into the ring. Elgin with a corner clothesline. Rockwell responds with a Vertical Suplex. Rockwell poses for the crowd. Elgin is pissed. Elgin floors Rockwell with a Big Lariat. Elgin BuckleBombs Rockwell. Elgin plants Rockwell with The Elgin Bomb to pickup the victory. 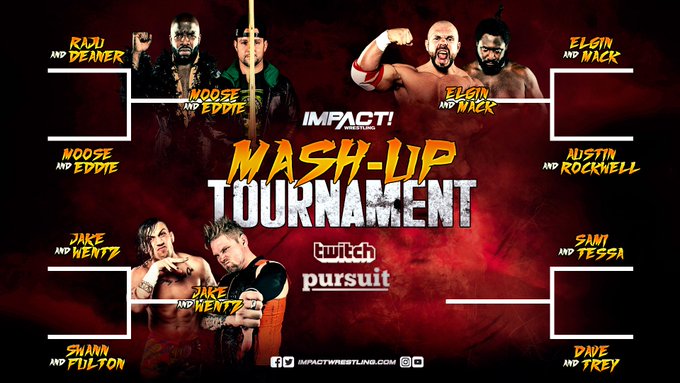 .@TheSamiCallihan has a plan to ensure total dominance for oVe in the #MashUp Tournament!

Fourth Match: Sami Callihan & Tessa Blanchard vs. Dave Crist & Trey Miguel in a First Round Match In The Mash Up Tournament

– IMPACT Plus! Flashback Moment Of The Week: OVE vs. Eddie Edwards, Tommy Dreamer and Moose in a House Of Hardcore Match From The IMPACT Redemption PPV.

Havok with Two Big Biel Throws. Johnny Bravo hops on the ring apron to distract the referee. Rayne applies the guillotine choke. Rayne drops Havok with a DDT. Rayne turns her attention to Valkyrie. Valkyrie Spears Rayne. Havok responds with a shoulder tackle. Forearm Exchange. Valkyrie with a Desperation Boot. Valkyrie with a Double Fallaway Slam. Bravo pulls Valkyrie out of the ring. Rayne with a Flying Crossbody Block. Valkyrie heads to the backstage area. Rayne is lighting up Havok’s chest. Rayne goes for a Tilt-A-Whirl HeadScissors TakeOver, but Havok counters with The TombStone PileDriver to pickup the victory. 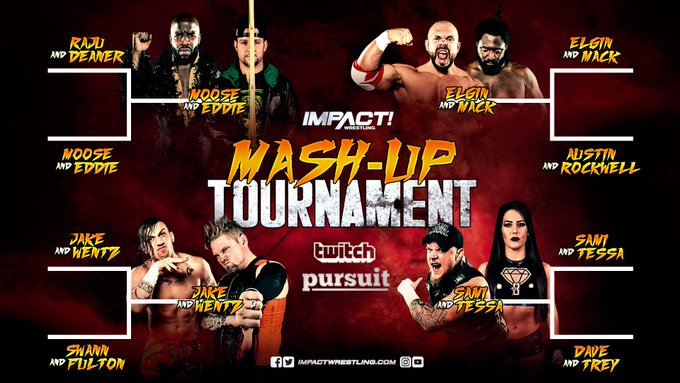 Blanchard with a forearm smash to Wentz. Elgin rolls Edwards back into the ring. Edwards sends Elgin tumbling to the floor. Moose stops Edwards in his tracks. Moose PowerBombs into the calvary on the outside. Elgin with a DeadLift German Suplex. Edwards is throwing forearms at Elgin. Elgin with a discus forearm smash. Edwards answers with a Big Boot. Elgin SuperKicks Edwards. Elgin with a Step Up Enzuigiri. Mack delivers The Pounce. Mack lands a SomerSault Plancha. Elgin nails Edwards with a Spinning Back Fist. Elgin BuckleBombs Edwards. Elgin connects with The Elgin Bomb. Edwards and Moose has been eliminated. Elgin blocks a boot from Wentz. Elgin clotheslines Wentz. Wentz with a Jumping Knee Strike. Wentz goes for a SuperKick, but Elgin counters with a knife edge chop. Wentz with a SpringBoard Corkscrew Body Press. Elgin PowerSlams Wentz. Mack bodyslams Crist. Mack goes for a Standing MoonSault, but Crist gets his knees up in the air. Crist tags in Callihan.

Callihan transitions into a ground and pound attack. Callihan rakes the eyes of Mack. Callihan with a leg drop. Callihan stomps on Mack’s chest. Callihan applies a rear chin lock. Mack gets back to a vertical base. Callihan slaps the back of Mack’s neck. Mack hits The Samoan Drop. Mack follows that with a Standing MoonSault for a two count. Elgin clears the ring. Blanchard gets in Elgin’s face. Callihan shoves down Blanchard. Elgin with a big haymaker. Elgin drops Mack with a Lethal Lariat. Elgin heads to the backstage area. Callihan drills Mack with The Spike PileDriver. Elgin and Mack has been eliminated. Forearm/Stereo SuperKick Exchange. Wentz with a SpringBoard Cutter. Blanchard responds with The Buzzsaw DDT. Crist with The RoundHouse Kick. Crist with a Running Death Valley Driver for a two count. Crist is pissed. Callihan goes for The Finger Poke Of Doom, but Crist counters with a small package. Callihan and Crist are trading back and forth shots. Blanchard tags himself in. Callihan connects with The Spike PileDriver. Blanchard plants Crist with Magnum to pickup the victory.

Check Out Episode 164 of The Hoots Podcast

SPOILERS: Results From The NXT U.K. Tapings In Plymouth, England