The title, cover art and synopsis have been revealed for the upcoming book from former WWE head creative writer Brian Gewirtz.

As noted earlier this week, it was revealed that Gewirtz is scheduled to release a book on his time with WWE in August of next year. It will be published by Twelve Books, an imprint of Hachette Book Group.

In an update, the publisher has revealed that the book will be titled “Heels and Heroes” but the full title is “There’s Just One Problem: Inside the WWE with Demented-but-True Stories of Mayhem, Metal Chairs, and Major Insanity.”

The current release date for the 288-page book is Tuesday, August 16. The book is scheduled to be published via hardcover and e-book. You can pre-order both versions at a sale price via this link.

Gewirtz tweeted on the book and said he’s very excited.

“Thank you! News got out early and the book (with the actual title and cover) to be released next year but very excited about it. I mean what good is spending 16 years in the business if you don’t have at least 25+ completely insane but true stories to tell,” he wrote.

Gewirtz started with WWE in 1999 and worked his way up to the role of head writer. He left in 2012, but continued to work as a consultant through 2015. Gewirtz originally got to WWE via Dwayne “The Rock” Johnson, and since leaving WWE he has helped to create Titan Games, Young Rock, and other projects for Rock. He currently works as Senior Vice President of Development for Rock’s Seven Bucks Productions company.

According to the official synopsis, the book will give an inside look at the more than 15 years Gewirtz spent with WWE, his interactions with top stars including WWE Chairman & CEO Vince McMahon, and more. You can read the full synopsis from the publisher below, along with the cover art and the full tweet from Gewirtz:

Former WWE head writer Brian Gewirtz brings readers behind the scenes for an unprecedented look at the chaotic, surreal, unbelievable backstage world of the WWE.

With untold stories from a career spanning over 15 years and featuring the biggest names and controversial moments in wrestling history, HEELS AND HEROES is an honest, unflinching look on how an introverted life-long fan unexpectedly became one the most powerful men in all of professional wrestling.

For decades wrestling was shrouded in secrecy. It had larger than life personalities, bone crunching physicality and jaw-dropping theatrics but backstage it was an industry devoid of outsiders. Then in 1999, after working together on a special for MTV, Dwayne “The Rock” Johnson turned to 26-year old television writer Brian Gewirtz and asked “You ever consider writing for WWE?” That question, and its answer, would have a profound effect on both of their lives for years to come.

HEELS AND HEROES is a story about perseverance, tenacity, and steel chairs. Most writers in the WWE last for a matter of months; Gewirtz was there for over 15 years, writing some of most memorable and infamous storylines in WWE history (covering the “Attitude Era”, the “Ruthless Aggression Era” and into the “PG” and “Reality” eras).

Throughout this journey Gewirtz found himself becoming both friend and antagonist to some of the biggest names in WWE history – Stone Cold Steve Austin, John Cena, Stephanie McMahon, Bill Goldberg, Paul Heyman, Chris Jericho, Shawn Michaels, and the two men who he worked the most closely with WWE Chairman Vince McMahon and Dwayne “The Rock” Johnson. These men not only shaped his life professionally but also personally, forcing him to grow and change both as a writer and a human being.

So how does a lifelong fan and outsider break through to become the ultimate insider? How does a low-key personality deal directly with his boss, the most brash, unpredictable “alpha male” on the planet, WWE Chairman Vince McMahon? How does one gain respect in a locker room that wants nothing more than to see him disappear? Where does one go when every year in wrestling takes you further away from the writing career you always wanted? Taking advice from his idol, the late “Rowdy” Roddy Piper, when you’re so full of fear, there’s only one way to push through: become fearless. 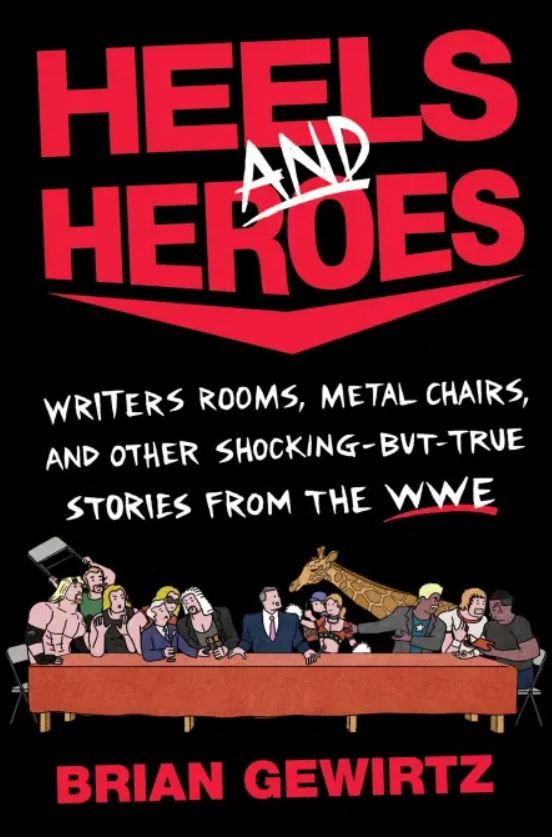 Thank you! News got out early and the book (with the actual title and cover) to be released next year but very excited about it. I mean what good is spending 16 years in the business if you don’t have at least 25+ completely insane but true stories to tell. https://t.co/s7nbC7NwpM