– Aiden English will be joining Tom Phillips on commentary.

#Imperium is in attendance for the unveiling of the #NXTUKTitle! @WalterAUT is looking good with that CHAMPIONSHIP! pic.twitter.com/j1YATE1ZHu

Sid Scala: NXT UK Universe, myself and Mr. Saint would like to say a huge thank you to making this brand, our brand, the fastest growing brand in the history of WWE. And it is with that in mind, that we are immensely proud to present to the current United Kingdom Champion, WALTER, the brand new NXT UK Championship.

WALTER: Thank you. I am grateful that you’re finally listening to me and you finally dispose of that title that got polluted by the hands of Tyler Bate. And he even got polluted by the mouth of Pete Dunne. From now on, the NXT United Kingdom Championship is the greatest prize of European Professional Wrestling. And it takes a champion like myself to give it the respect it deserves. And talking about respect, Undisputed Era! After I dominated Joe Coffey at NXT UK TakeOver, you stepped onto this holy ground and disrespected me.

Disrespecting Imperium means disrespecting this mat. Adam Cole, you and your pathetic boys are a prime example of what is wrong with this sport. This might be a joke for you, but for us it’s serious. To us, it’s personal. At Worlds Collide, we are gonna humiliate you. We’re gonna disrespect you. We’re gonna hurt you, in the name of restoring the honor of the sport we desperately love. We’re Imperium and to us, this mat is sacred.

– The theme song for WWE Worlds Collide is Fury by Wage War.

– There was a backstage interview with NXT UK Women’s Champion, Kay Lee Ray. Kay Lee Ray is not phased by Mia Yim. She went past Toni Storm and Piper Niven at TakeOver Blackpool 2. Ray says that Yim will become a statistic after Worlds Collide.

– Next week, The Hunt will battle Oney Lorcan & Danny Burch.

Devlin grabs one of Ligero’s horns before the bell rings. Ligero drops Devlin with a forearm smash. Ligero with forearm shivers. Ligero is mauling Devlin in the corner. Devlin reverses out of the irish whip from Ligero. Ligero rolls Devlin over for a two count. Ligero with a Step Up Enzuigiri. Ligero with a corner clothesline. Liger follows that with a Fireman’s Carry Toss for a two count. Devlin kicks Ligero in the face. Devlin with a Uranage Slam. Devlin with a Standing MoonSault. Devlin takes off his jacket. Devlin transitions into a ground and pound attack. Devlin talks smack to Ligero. Ligero negates The Devil Inside. Ligero clotheslines Devlin over the top rope. Devlin pulls Ligero off the ring apron. Ligero blasts Devlin with a knife edge chop. Ligero handstands on the ring apron. Devlin SuperKicks Ligero. Devlin throws Ligero into the steel ring steps.

"The last time we saw you, you were LAID OUT with #UndisputedERA standing over you." – @MandrewsJunior

Despite what happened at #NXTUKTakeOver, @Joe_Coffey knows what this HUGE match against @FinnBalor means for @UNBESIEGBAR_ZAR…and will be ready to FIGHT after that! pic.twitter.com/qhg5aKiz88 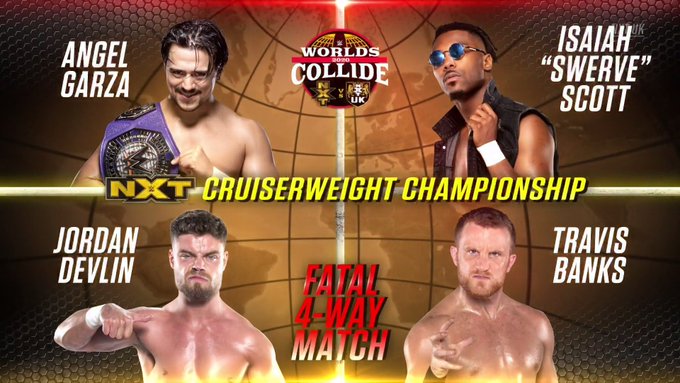 Checkout Episode 189 of The Hoots Podcast

Seth Rollins On The Shield Taking Over The Wrestling Industry: “That Was Always The Goal”