WWE and A&E have officially announced the premiere dates and full details for their 10-week original programming partnership that begins on Sunday, April 18.

Originally announced in 2019, A&E and WWE Studios will air eight two-hour episodes of their hit “Biography” series. A&E will also premiere a new series titled “WWE’s Most Wanted Treasures” on the hunt for iconic WWE memorabilia that has been lost for decades.

The trailer for “Biography: WWE Legends” can be seen below.

The “WWE’s Most Wanted Treasures” series will air at 10pm ET right after the “Biography” specials go off the air on those Sundays. Triple H and Stephanie McMahon will host the hunt for some of WWE’s most iconic missing memorabilia items, including Kane’s original mask, Andy Kaufman’s neck brace, and more. Several Superstars and Hall of Famers will join the hunt, including Foley, The Undertaker, Ric Flair, Booker T, Jerry Lawler, Mark Henry, Charlotte Flair, Greg Valentine, Brutus Beefcake, Jake Roberts, and Sgt. Slaughter. Former NFL player AJ Francis, who signed with WWE in 2020, will head out on the road with the famous WWE names to hunt for the memorabilia.

Stay tuned for more on the new projects from WWE and A&E. Below is a preview for the “Biography” series, along with the full announcement sent to us today by WWE, which includes details on who produced the Biography documentaries:

New York, NY – February 23, 2021 – A&E Network and WWE Studios are giving fans an exclusive look behind the curtain in an all-new Sunday night programming partnership. With unprecedented access to WWE’s archive, the ten-week programming block features eight original two-hour documentaries under the award-winning “Biography” banner showcasing the stories behind some of the most memorable WWE Superstars of all time including “Stone Cold” Steve Austin®, “Macho Man” Randy Savage®, “Rowdy” Roddy Piper™, Booker T®, Shawn Michaels®, Bret Hart, Mick Foley and Ultimate Warrior. The new “Biography” specials are helmed by some of the industry’s top directors and storytellers to chronicle the success of these WWE Legends and their lasting mark on both sports entertainment and popular culture. Each special will air weekly at 8pm ET/PT beginning Sunday, April 18.

Following at 10pm ET/PT, the brand-new series “WWE’s Most Wanted Treasures,” led by WWE’s Stephanie McMahon and Paul “Triple H” Levesque launches a hunt for some of WWE’s most iconic missing memorabilia including Kane’s original mask, Ric Flair’s Butterfly Robe, Andy Kaufman’s neckbrace, Andre The Giant’s passport and more. In order to find these quintessential relics, the team will join forces with WWE Legends including Undertaker, Ric Flair, Mick Foley, Booker T and more to bring these items home to the WWE Archives.

“For more than two decades, ‘Biography’ has been the home for premium non-fiction storytelling and we are excited to expand upon that with this all-encompassing partnership with WWE,” said Elaine Frontain Bryant, EVP and Head of Programming, A&E Network. “This one-of-a-kind collaboration gives viewers the ultimate ringside seat as we chronicle the journeys of these cultural icons and the memorabilia that follows.”

“We are thrilled to unveil the stories behind some of the greatest Legends and moments in WWE history,” said Stephanie McMahon, WWE Chief Brand Officer. “Together with A&E, we’ve created an incredible slate of programming steeped in nostalgia that will inspire and entertain audiences worldwide.” 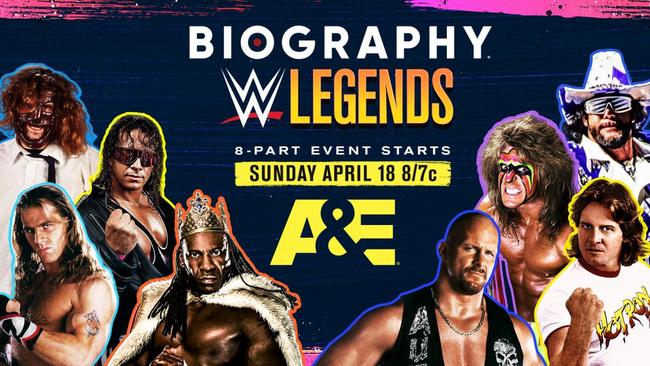 “Biography: “Stone Cold” Steve Austin” – Directed by Jake Rogal and Executive Produced by Jason Hehir (“The Last Dance,” “Andre The Giant”), this film traces the story of the man who became WWE’s biggest star in the 90s. “Stone Cold” Steve Austin’s authentic, fiery personality epitomized WWE’s “Attitude Era” and transformed him into a pop culture icon. After nearly being paralyzed by a neck injury, Austin made one of the greatest comebacks in WWE history. He was inducted into the WWE Hall of Fame in 2009.

“Biography: “Rowdy” Roddy Piper” – Directed by Emmy and Peabody Award winner Joe Lavine (ESPN 30 for 30 “Playing for the Mob,” HBO “Namath”), this film focuses on “Rowdy” Roddy Piper, who is universally considered one of WWE’s greatest villains. During his Hall of Fame career, he played the role of the antagonist against a who’s who of WWE greats, while amassing more than 30 championships.

“Biography: “Macho Man” Randy Savage” – Produced by Billy Corben and Alfred Spellman (“Cocaine Cowboys,” “Screwball,” ESPN 30 for 30 “The U”), this film will tell the larger-than-life story of one of the most colorful and charismatic Superstars to ever step foot inside the ring. With two WWE Championships, four WCW® World Championships and a 14-month reign as Intercontinental Champion, Savage became known for his famous catch phrases, larger-than-life personality and the enormous, flashy robes he wore into the ring.

“Biography: Booker T” – Directed by Emmy and Peabody Award winner George Roy (“The Curse of the Bambino”, “Mayweather”), this film showcases one of the greatest Superstars in sports entertainment history. Booker T is an 11-time WCW Tag Team Champion, a six-time World Champion, winner of the 2006 King of the Ring Tournament, and a two-time (2013 and 2019) inductee into the WWE Hall of Fame. In addition to his Hall of Fame career in the ring, Booker T also went on to become a color commentator for WWE’s weekly programming.

“Biography: Shawn Michaels” – Directed by Joe Lavine (“Rowdy” Roddy Piper, ESPN 30 for 30 “Playing for the Mob,” HBO “Namath”), this film chronicles the wild life of one of WWE’s greatest performers and most enduring villains. After drug addiction nearly cost him his life, Shawn Michaels, aka “The Heartbreak Kid,” made one of the most improbable late-career comebacks in WWE history. He was inducted into the WWE Hall of Fame in 2011.

“Biography: Ultimate Warrior” – Directed by Daniel Amigone (“24/7 Red Wings: Maple Leafs – Road to the Winter Classic,” “Chain of Command,” “The Circus: Inside the Greatest Political Show on Earth”) and Executive Produced by Jake Rogal and Jason Hehir (“The Last Dance,” “Andre The Giant”), this film shares the story of Ultimate Warrior, a WWE Hall of Famer who inspired an entire generation of fans living by his mantra of “always believe.” With his colorful face paint and equally colorful interviews, Ultimate Warrior is perhaps best remembered for defeating Hulk Hogan at WrestleMania VI to become both the WWE Champion and the Intercontinental Champion.

“Biography: Mick Foley” – Directed by Thomas Odelfelt (24/7 “Mayweather-Marquez,” 24/7 “Penguins- Capitals: Road To The NHL Winter Classic,” HBO “Courtside At The NBA Finals”) and Executive Produced by Jake Rogal and Jason Hehir (“The Last Dance,” “Andre The Giant”), this film follows the unique, multifaceted career of Mick Foley, a 2013 WWE Hall of Fame inductee better known as “Mankind.” A fan favorite during WWE’s “Attitude Era,” Foley shocked audiences in 1998 during a career defining match as he was thrown off the top of the Hell in a Cell by Undertaker. “Biography: Bret “Hitman” Hart” – Directed by George Roy (“Booker T,” “The Curse of the Bambino,” “Mayweather,” HBO “Mantle”), this film tells the story of Bret Hart, one of the greatest technical athletes in WWE history, earning him nicknames “The Hit Man” and “The Excellence of Execution.” Throughout his storied career, the five-time WWE title holder famously defeated “Rowdy” Roddy Piper, Ric Flair and Yokozuna, and was inducted into the WWE Hall of Fame in 2006. 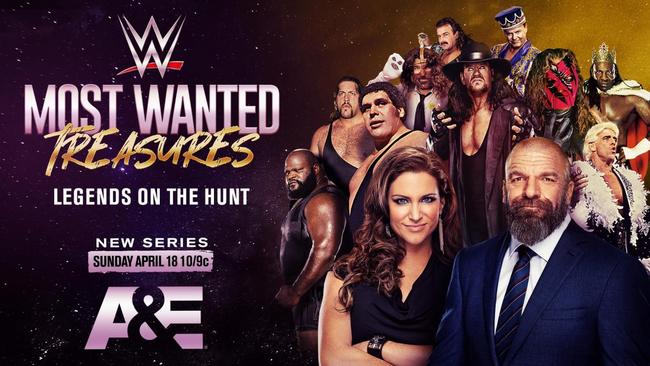 “WWE’s Most Wanted Treasures” takes viewers on a journey to find some of WWE’s most iconic, lost memorabilia. In each of the nine episodes, WWE’s Stephanie McMahon and Paul “Triple H” Levesque lead a team of collectors, WWE Superstars and Legends as they investigate, negotiate, bid and travel across the country to hunt down and reclaim some of the most elusive WWE collectibles. Throughout history, WWE’s action-packed storylines have spawned iconic, one-of-a-kind memorabilia, most of which have gone missing. Superstar in training, AJ Francis will head out on the road alongside some of the most famous WWE Legends of all time including The Undertaker, Ric Flair, Charlotte Flair, Mick Foley, Kane, Big Show, Mark Henry, Jerry “The King” Lawler, Booker T, Greg “The Hammer” Valentine, Brutus “The Barber” Beefcake, Jake “The Snake” Roberts and Sgt. Slaughter. The series will unearth these rare items in the hopes of preserving and sharing the legacy behind the memorable moments in WWE history.

Amy Rose Discusses Her Decision To Stay With ROH, Talks The Ups and Downs Of The Women’s Division