by Joshua Lopez
in RESULTS, WWE NXT Results
A A
0

Jinny and Dawn will start things off. Collar and Elbow Tie Up. Jinny applies a wrist lock. Dawn with a fireman’s carry takeover. Dawn applies an arm-bar. Dawn transitions into a hammerlock. Dawn bends the fingers of Jinny. Dawn slams the right shoulder of Jinny on the canvas. Dawn tags in Brookside. Brookside with a Flying Double Axe Handle Strike. Brookside applies a side headlock. Jinny responds with a wrist lock. Brookside reverses the hold. Brookside dropkicks Jinny. Jinny scrambles to the corner. Jinny tags in Gabert. Brookside goes for a single leg takedown, but Gabert blocks it. Gabert with a standing arm-bar.

Brookside drives her knee into the midsection of Gabert. Gabert negates Brookside’s signature moves. Gabert with a Big Biel Throw. Gabert tags in Jinny. Jinny repeatedly stomps on Brookside’s chest. Jinny is choking Brookside with her boot. Jinny tags in Gabert. Gabert goes for a BodySlam, but Brookside lands back on her feet. Brookside crawls under Gabert. Brookside tags in Dawn. Dawn is throwing forearms at Gabert. Dawn with a Jumping Knee Strike. Dawn goes for a RoundHouse Kick, but Gabert counters with a Knee Lift. Gabert plants Dawn with The Dominator. Gabert tags in Jinny. Jinny goes on to pickup the victory. 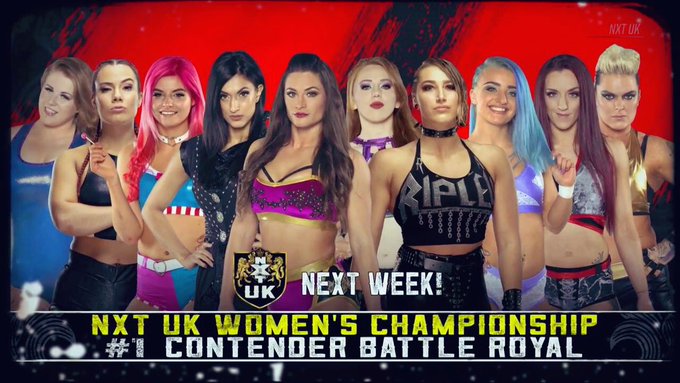 – The Hunt will battle Gallus next week.

If you want to take a ride on the wild side with the "shiny, shiny," #NXTUK #WomensChampion @tonistorm_ is ready to kickstart your 🖤! pic.twitter.com/nNDQSyfviG

Pete Dunne and Fabian Aichner will start things off. Dunne with a running forearm smash. Dunne repeatedly stomps on Aichner’s chest. The referee is trying to calm down Dunne. Aichner with an Inside Out Lariat. Aichner transitions into a ground and pound attack. Collar and Elbow Tie Up. Aichner applies a side headlock. Dunne leapfrogs over Aichner. Dunne clotheslines Aichner. Dunne applies a wrist lock. Dunne tags in Bate. BSS stomps on both shoulders of Aichner. Bate with a standing arm-bar. Aichner punches Bate in the back. Aichner tags in Barthel. Bate ducks a clothesline from Barthel. Bate with two dropkicks. Bate poses for the crowd. Barthel drops Bate with a double chop. Barthel is choking Bate with his boot. Barthel applies a standing cravate. Following a snap mare takeover, Barthel stomps on Bate’s face. Barthel rams his elbow across Bate’s face. Bate with an arm-drag takeover. Bate brings Barthel to the corner. Bate tags in Seven. Seven hits The Wasteland. Bate with a Swanton Bomb off Seven’s shoulders. Seven hooks the leg for a one count. Seven applies a front face lock. Barthel kicks Seven in the gut. Barthel uppercuts Seven. Barthel tags in WALTER.

Collar and Elbow Tie Up. WALTER backs Seven into the turnbuckles. Seven slaps WALTER in the chest. WALTER is pissed. Seven is lighting up WALTER’s chest. Seven drops Aichner with a DDT. WALTER delivers a knife edge chop. WALTER with a dragon screw neck whip. WALTER kicks Seven in the back. WALTER bodyslams Seven for a two count. WALTER applies a wrist lock. WALTER tags in Aichner. Imperium are cutting the ring in half. Aichner repeatedly stomps on Seven’s chest. Aichner with a Belly to Back Suplex for a two count. Aichner tags in WALTER. WALTER kicks Seven in the gut. Seven is displaying his fighting spirit. WALTER drops Seven with a Big Boot. WALTER knocks Bate off the ring apron. WALTER with a short-arm shoulder tackles. Seven fires back with two open hand chops. Seven with a Spinning Back Fist. WALTER with an OverHead Slam for a two count. WALTER drives his knee into Seven’s ribs. WALTER tags in Barthel.

Barthel with a knee drop. Barthel kicks the left shoulder of Seven. Barthel talks smack to Seven. Barthel is demolishing Seven in the corner. The European Union are double teaming Seven. Aichner drops Seven with a SpineBuster. Barthel hits The PK. Aichner with the cover for a two count. Aichner applies a sleeper hold. Seven rolls Aichner over for a two count. Seven decks Aichner with a JawBreaker. Seven sends Barthel crashing to the outside. Seven creates distance with a Step Up Enzuigiri. Dunne and WALTER are tagged in. Dunne with Two Running Enzuigiri’s. Dunne with a Missile Dropkick. WALTER chops the back of Dunne’s neck. WALTER applies a sleeper hold. Dunne grabs the top rope to force the break. WALTER goes for a Release German Suplex, but Dunne lands back on his feet. Dunne kicks the back of WALTER’s head. Dunne with a Rebound German Suplex. WALTER responds with a Big Boot. WALTER follows that with an OverHead Toss. Bate and Aichner are tagged in.

Bate with rapid fire haymakers. Aichner kicks Bate in the gut. Bate with a Hurricanrana. Bate with a Running European Uppercut. Bate drills Aichner with a knee lift. Bate with a Flying Uppercut. Bate hits The Exploder Suplex on top of Aichner. Bate delivers The Airplane Spin. Bate dumps Aichner over the top rope. WALTER gets Barthel off Bate’s shoulders. Bate nails WALTER with Bop and Bang. Bate goes for The Airplane Spin, but Aichner gets in the way. Aichner launches Bate to the corner. Barthel with an Apron Enzuigiri. Aichner drops Bate with a BrainBuster for a two count. Imperium clears the ring. Barthel bounces Bate’s head on the top turnbuckle pad. European Union hits their BackStabber/Flying Double Foot Stomp Combination for a two count.

European Union continues to double team Bate. Bate with a HandSpring Double Lariat. Bate drops WALTER with a Rolling Kick. Bate tags in Seven. Dunne tags himself in. Seven hits The Steven Star Lariat. Seven lands The Suicide Dive. Dunne connects with Bitter End. Dunne tags in Bate. Bate with a Corkscrew Splash. WALTER breaks the pin attempt. Dunne kicks WALTER out of the ring. WALTER inadvertently chops the steel ring steps. WALTER dumps Dunne back first on the ringside barricade. Seven clotheslines Aichner over the top rope. Alexander Wolfe drops Bate with a SitOut PowerBomb. WALTER rolls the referee back into the ring. Barthel goes on to pickup the victory. Alexander Wolfe has joined Imperium to close the show.

Check Out Episode 160 of The Hoots Podcast

Finn Balor Says He Always Tries To Make Every WWE Department Happy: “I’ve Done That At The Expense Of My Own Happiness”

Jim Cornette Talks Why The Rock vs. Roman Reigns Is Different From Other Part-Timer vs. Part-Timer Matches