by Marc Middleton
in AEW News and Rumors
A A
31

Amanda Huber, the widow of former WWE and AEW star Brodie Lee (Jon Huber), took to her Instagram Stories this afternoon and addressed fan criticism over how often AEW has been using her son, Brodie Lee Jr., also known as -1 of The Dark Order.

AEW has continued to let Brodie Jr. appear with The Dark Order on various shows over the past few months, which comes after AEW President Tony Khan signed Brodie Jr. to a legitimate contract that will be valid when he turns 18 years old, if he wants to pursue a career in pro wrestling. Amanda often posts about how much Brodie Jr. loves the sport, and how he’s been trying to learn.

Regarding the criticism on social media, Amanda said it’s disheartening to see people accuse AEW of exploiting her son. She noted how AEW has helped the family since Brodie passed away on December 26. She also thanked Megha Parekh, the Chief Legal Officer of AEW and the Jacksonville Jaguars, and Margaret Stalvey, the Legal Coordinator of AEW and the Jaguars. Amanda stressed how school comes first for her son as visiting AEW is a privilege.

You can see Amanda’s full statement below:

“I’ve loved pro wrestling my entire life. It’s been my world for 19 years now. I still love it more than most things in this world.

I try to ignore the shit online, but know I see it. I see the snide comments about Brodie’s involvement. The use of the word exploitation. It’s disheartening.

AEW has helped us pick up the pieces.

They let Brodie feel like he’s a part of something. Notice there’s no storylines involving him. Just him being connected to a huge part of him that’s missing.

What everyone doesn’t see on the other side of social media is a kid who is carrying so much grief yet so much joy. A kid who is excelling in his therapy. A kid who despite the worst few months of his life got 10-A’s and 3-B’s on his report card last week. On days we go to AEW you are all missing him doing his school work from a hotel room because going to AEW is a privilege. Or sitting with Aunty Megha working in math problems.

They also make me feel like I’m a part of something. We make the drive every other show so I can spend time with people who remind me of the best parts of being alive. People like @meghalegalgirl10 & @margaret.stalvey who sit in the crowd next to me and let me vent & cry & laugh & breathe in a world that wants me to be weighed down with grief. 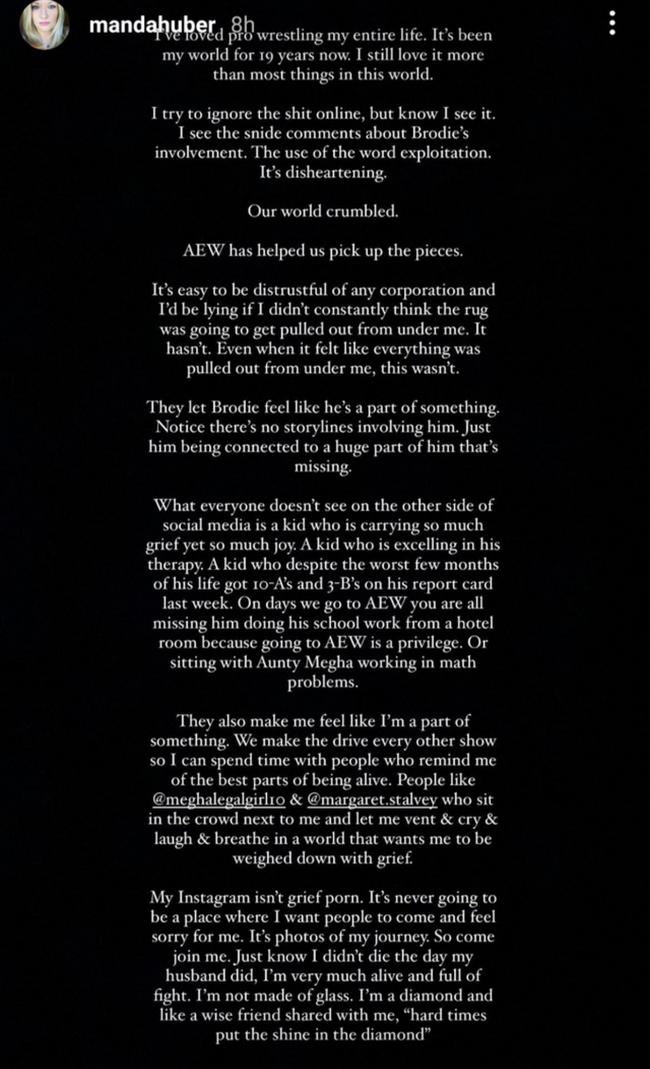 Moose Reveals That IMPACT Was Going To Bring Back King Of The Mountain Matchup, How Plans Changed Due To COVID-19 Outbreak

Tony Schiavone on Why Tony Khan Made an Appearance on AEW “Dark: Elevation”