The Kayfabe History of the World Title

by LWO4Life
in El Gringo Loco
A A
1

He was born Robert Herman Julius Friedrich, in Wisconsin on June 30, 1891. When Gene Hackenschmidt was conquering the wrestling world in 1901, young Bob was growing up admiring  Wisconsin wrestler, Evan “the Strangler” Lewis. Though Lewis was much older in the 1890’s, he had still managed to unify the American Catch as Catch Can and Greco-Roman wrestling titles. Bob Friedrich was only a little boy when Lewis and Martin “Farmer” Burns had series of matches in the late 1890’s that headline many newspapers across the nation; the same Farmer Burns who would train Frank Gotch and Earl Caddock. Ironically, many accused the older Lewis and Burns of not exactly being on the “up and up” in terms of the legitimacy of their matches. Keep this in mind as we follow young Bob Friedrich.

Bob Friedrich had a deep love for wrestling, and as a teenage Friedrich would wrestle men 10 to 20 years older than him. Winning his first match in 1905 at 14, Friedrich had all the talent in the world to change wrestling. What became more important than having actual wrestling skills, Friedrich start to learn the business side of wrestling. Instead of going to high school, Friedrich’s education was wrestling. Bob was interested in gaining all the knowledge he possibly could about wrestling and the business. As he grew older, he just was getting better and better to the point that some thought he was unbeatable. Enter one of the few men to have beaten Frank Gotch, Fred Beell. You see, though Friedrich was an accomplished wrestler, he was not in the class of a Fred Beell, yet. Beell abused Friedrich, choking him out and then pinning him to win two falls within 30 minutes. This incident would change Friedrich forever. 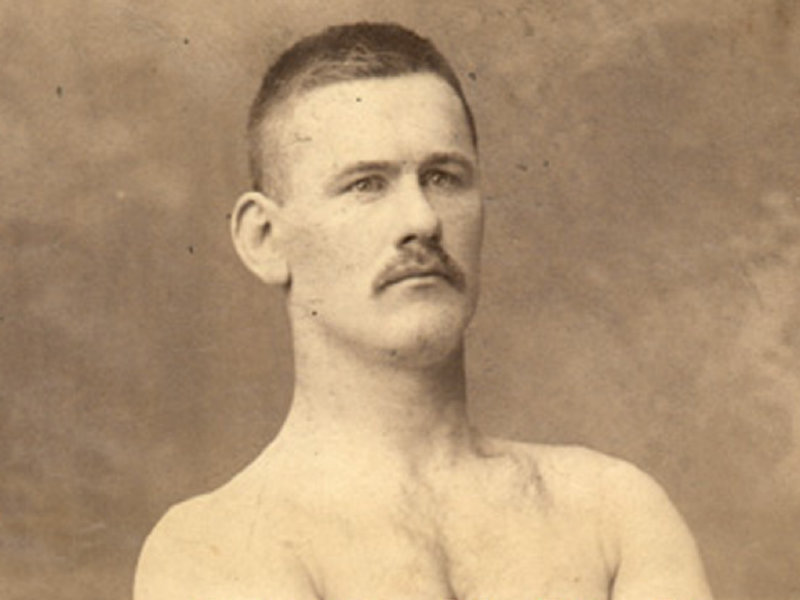 After the match, Beell went on the microphone and told the crowd that one day, Bob Friedrich would be champion. Embarrassed, Friedrich left the world of legit traveling wrestling for a short time and joined “worked” promoters. Since the late 1800’s, “worked” matches were design to draw attention to attract crowds. For elite wrestlers, the idea of being in a “worked” match was beneath them. If you wanted to join the elite class of wrestlers then you did not go into working “worked” matches. But a broken young man like Bob Friedrich felt like he needed a change, so he packed his bags and went to work traveling the “worked” circuit of wrestling.

Kentucky became the first place Friedrich worked for, with a promoter named Bill Barton. The dates Friedrich was scheduled to wrestled went to the wrong address. Friedrich would not arrive to Kentucky until a week later. Bill Barton had another wrestler named Bob Managoff filled in, performing as “Bob Fredrick” in front of the audience.

Since the audience had already met Bob Fredrick, it would be hard to introduced Bob Friedrich. Bob Friedrich needed a new name, so Bill Barton decided to go back to Wisconsin. Looking at the best wrestlers from the state, it was decided that Bob Friedrich would go by Ed Lewis. Named after Evan “the Strangler” Lewis, Ed Lewis began using Evan Lewis’s Sleeper Hold. Ed Lewis would pick up the nickname “the Strangler” by newspaper writers due to obvious comparison. This was the change needed for Ed Lewis to breathed life back to his career. (Keep in mind Lewis’s career was now 8 years old, Making Lewis only 22 years old.)

In December 1916, Finnish wrestler John Olin and world champion Joe Stecher’s match ended when both men stopped wrestling and proceeded to beat the living hell out of each other outside the ring. Stecher injured his shoulder in the brawl and was unable to continue; therefore Olin was declared the winner, but not the champion. The public had to depend on the newspapers to follow sports, promoters used this to their advantage to put over their guy. In this case Olin’s promoter declared him to be the new world champion, though this went unnoticed. Olin’s claim joined the noise of this era, when many titles appeared.

The World title claim lasted five months, as Ed “the Strangler” Lewis challenged for the title. With Frank Gotch as the referee, to co-sign this as a world title match, Lewis dominated Olin and forced him to give up at 2 hours. Olin would accuse Gotch of coaching Lewis during the match. Unlike Olin, who was more modest about his claim to the world title, Lewis was very boastful. Gotch called Lewis the greatest wrestler of that era. As for Lewis, well let’s just say that his claim of the “Olin Line” of the title would be as legit as the circus wrestling he was doing. 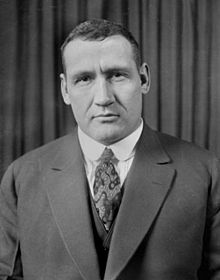 John Olin in 1917, one year after “winning the World title”

One interesting thing that Lewis was able to do is self-promote himself. Maybe he learned because he was a 12 year veteran wrestler at the age of 26, or maybe it’s because of his time in Kentucky doing “worked” wrestling cards. Lewis had everything from showmanship to actually wrestling ability. He would become the most known wrestler of that era; even though he was never the true world champion. In the summer of 1917, he traded the “Olin” title with Wladek Zbyszko. But even after losing to Zbyszko in a match, Lewis claimed his title was not on the line since he couldn’t use the Sleeper Hold as his finisher. Lewis began wrestling defensive match which would allow him to get a draw instead of losing the title.

In 1918 promoters tried to make rules that forced Lewis to wrestle a more aggressive style by placing time limits and judges’ decisions to the matches. But Lewis did what he wanted and never stopped claiming he was world champion, even after Earl Caddock beat Lewis by decision. But Lewis’s new manager, Billy Sandow, claimed that Caddock could only win the title by pinfall or submission. Sound familiar? So even when promoters tried to get the “Olin” title off Lewis, his manager would change the rules on the fly. Lewis would hold on to dear life to his claim of the world title.

In the spring of 1919, Ed Lewis finally defeats longtime rival Joe Stecher. After wrestling in so many draws, including the infamous five hour long match, Lewis finally beat Stecher. This was the first time Stecher lost cleanly since his lost to Earl Caddock. Lewis had also gained the training of Joseph “Toots” Mondt, a former disciple of Farmer Burns, to help him get to that next level as a legit wrestler. But while Mondt’s could help Lewis achieve much as a true wrestler, Mondt’s vision of what professional wrestling should become would change everything. And wrestling would never, EVER, be the same, a-gain. 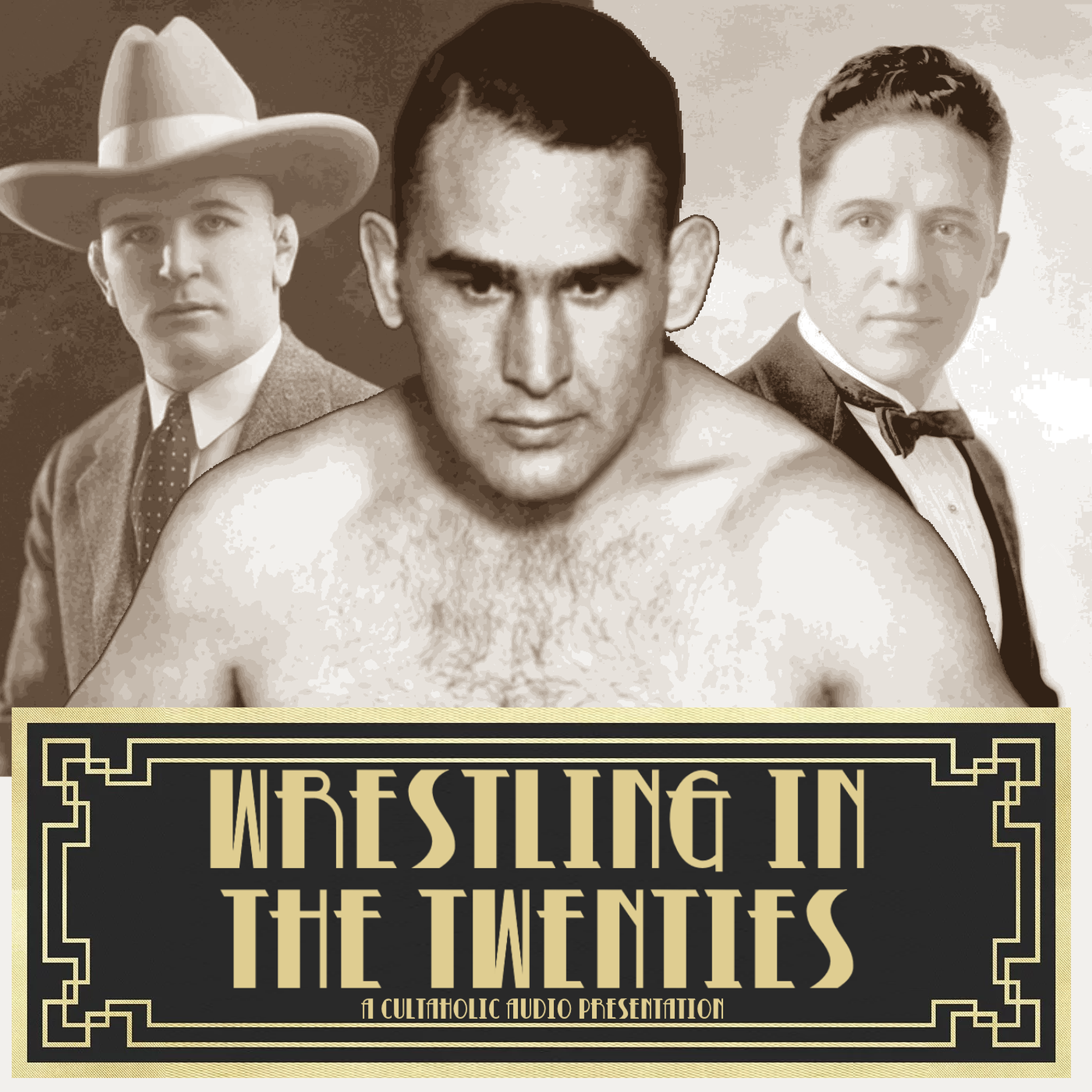 It was 1919 when Ed “the Strangler” Lewis, Billy Sandow, and “Toots” Mondt, formed the “Gold Dust Trio.” Wrestling “worked” matches was not new, but those matches were actual wrestling. Many times the wrestlers would know who was going to win a match, so when they felt the crowd starting to lose interest one wrestler would allow the other wrestler to pin them. In these worked matches wrestlers would trade wins. But what Lewis, Sandow and Mondt were setting up would be different, completely different. Mondt had a vision of wrestling, to speed up the action and mix in new styles. This new style would be faster, mix in boxing, and create angles to make the audience comeback for more. He called it “Slam Bang Western Style Wrestling“

In 1919, Mondt started training wrestlers in this new style. Wrestlers were buying in to this way of wrestling, as it allowed more people to make money. Prior to this, many cards only had one match scheduled. With worked matches, you eliminate three hours of hugging. With more matches on a card, you have more people making money. Also, with faster matches you’d have more people interested in going to the events. The “Olin” line title was paid for and created by the newly formed American Wrestling Association. (Important to note, this is AWA in Boston, not the the Minnesota promotion we’d see later.) Joe Stecher would win back the TRUE undisputed world title from Earl Caddock during the summer of 1920. Lewis though had legitimately lost his “Olin” line world title. Lewis was hitting hard times as he lost to Stecher and Wladek Zbyszko many times to close out the year. Though many of those matches were reported as very close grueling affairs. It might have been going between legit matches and worked matches, but for whatever reason Lewis was struggling.

Eventually in December of 1919, Lewis was able to get a match with Joe Stecher for the Undisputed World title. Over the course of 1919, all the disputed world titles had been unified, including the Olin line title. Joe Stecher had completed the journey and unified all the loose titles in the wrestling world. For Lewis, this was an opportunity that could not be wasted. In order to fully complete the Goldust Trio’s vision of wrestling, Lewis has to win this match. Lewis would train with Mondt in order to prepare for this match, and all of that training paid off. At the end of December 1919, Ed “the Strangler” Lewis was the undisputed champion of wrestling. Starting in early 1920, the undisputed title was now property of the Goldust Trio. Many other wrestlers followed the money and joined in on the fun. This was the beginning of the end, as now there was no turning back.