The happy couple held their first wedding at a ceremony on October 12, 2020 in Tampa, Florida. People Magazine now reports that Cena and Shay were married for a second time this past Friday at a private ceremony in Vancouver, British Columbia.

Friday’s ceremony was held at the Rosewood Hotel Georgia in Vancouver. As seen in the TMZ photo below, Cena wore a navy blue suit as he entered the members-only Vancouver Club with his wife, who wore a white open-back halter neck gown.

This ceremony was a few steps up from the 2020 wedding, which was held at the downtown Tampa office of lawyer Dilip Patel, who served as the officiant. TMZ noted that this bigger, private ceremony was held because the COVID-19 pandemic prevented a celebration back in 2020.

Cena and Shay previously met in Vancouver while Cena was filming “Playing with Fire” in early 2019. Cena has also spent time in Vancouver for “Peacemaker” filming, which will resume soon, if it hasn’t already. Shay, age 33, graduated from the University of British Columbia and works as an engineer in Vancouver. She became a Canadian citizen after her family moved there from Iran.

It was recently reported that WWE Chairman & CEO Vince McMahon had plans to travel to Vancouver to meet with Cena for an unknown reason. Now it appears that Vince was there for the wedding ceremony. TMZ noted that the private ceremony was a star-studded affair.

People close to the couple previously noted that it was “love at first sight” for Cena. As seen in the video below from January of this year, Cena talked about possibly having children while on The Drew Berrymore Show.

“I think just because you might be good at something, for me, it is not a strong enough reason to do that,” he said. “You have to have passion for it. You have to have fuel for it. It’s like saying to someone, ‘Man, you know, you’re pretty good with your hands, you’d be a great carpenter,’ but if I want to be an actor, I’ll be an actor.”

Stay tuned to WrestlingHeadlines.com for more on Cena. Below is the aforementioned photo and video: 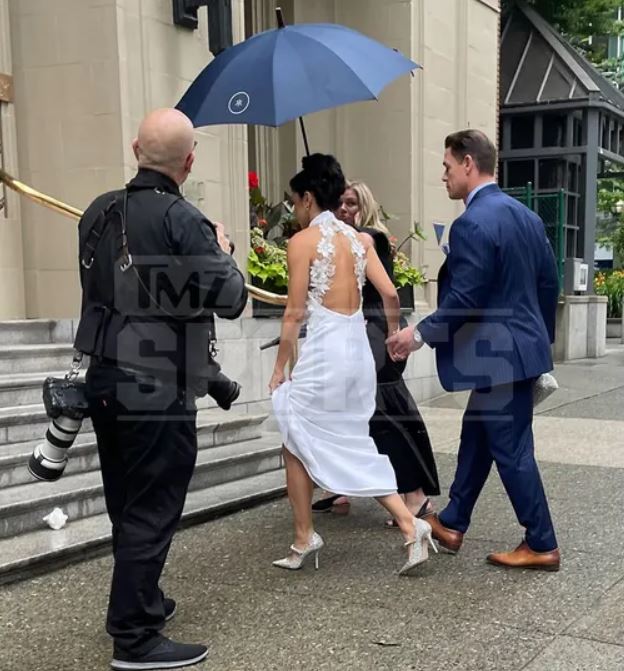