After slowing down on talent acquisitions during the early days of the COVID-19 pandemic, WWE has been going on a “signing spree” as of late, according to the Wrestling Observer Newsletter. It’s believed that there around 25 newcomers who are starting with the company soon.

As we’ve noted, the next WWE Performance Center Class is set to officially report to work on Tuesday, February 23. That class will include people like LA Knight (fka Eli Drake), Harlem Bravado, Taya Valkyrie, Anthony Henry, Christian Casanova, Blake Christian, AQA, and Sareee. Two former college football players are also rumored for this class – Rick Steiner’s son Bronson Rechsteiner and Parker Boudreaux, who has been compared to a young Brock Lesnar. It’s also been reported that three WWE NXT Superstar who have already debuted, in the Women’s Dusty Rhodes Tag Team Classic, are considered to be in this class – Cora Jade (fka Elayna Black), Gigi Dolin (fka Priscilla Kelly), and Zoey Stark (fka Lacey Ryan), who also made her singles debut this past Wednesday with a win over Valentina Feroz.

WWE is also signing new wrestlers to work the NXT UK brand. It was reported earlier this week that Millie McKenzie had been signed. The Wrestling Observer Newsletter reports that McKenzie was a regular opponent of Japanese wrestling legend Meiko Satomura on the indies, and that program is likely to continue in NXT UK. Satomura, who was hired to work as a coach and wrestler, is set to challenge NXT UK Women’s Champion Kay Lee Ray on the March 4 NXT UK episode. McKenzie is expected to be pushed.

Adam Maxted is also being signed for the NXT UK brand, according to the Observer. The 28 year old Maxted from Belfast, Northern Ireland is 6-foot-3 and 235 pounds, with a good physique. He has some celebrity status in the UK after appearing on the second season of ITV’s “Love Island” reality show in 2016. Maxted began training for pro wrestling after the show, and was being pushed in the World of Sport promotion.

Maxted participated in a WWE tryout at the O2 Arena in May 2017 when WWE was in London for RAW. He’s wrestled for OTT, IPW:UK and 5 Star Wrestling, among other promotions. Maxted made one appearance for Impact Wrestling in September 2018, teaming with Robbie X for a win over Jake McCluskey and Lucas Steel at Impact’s “Impact Wrestling vs. Europe” special. He is listed as the current OTT Gender Neutral Champion after defeating Mark Haskins for the title in January 2020.

Top international talent Davey Boy Smith Jr. is also rumored to be coming in. While not confirmed, it’s believed that the son of The British Bulldog has a good shot at returning to the company in the very near future. The Observer reports that it’s not clear where in WWE Bulldog Jr. would end up, but there was mostly talk a few months ago of putting him on the NXT UK brand, which he has confirmed. With that said, he could end up anywhere in the company.

Smith Jr., along with his mother and sister, are set to induct Davey Boy Sr. into the WWE Hall of Fame during WrestleMania 37 weekend. Smith Jr. has confirmed in multiple interviews that there is interest in a WWE return, from both sides. He spoke with MetroUK earlier this month and commented on the interest, and a possible spot in NXT UK.

“There’s been quite a bit of interest and a little bit of back and forth talk with myself and the company,” he confirmed. “I think that the plan – or what they were hoping – was for me to come to NXT UK. But unfortunately, right now because of COVID, those doors are kind of locked, we’ll see. We’re discussing and talking. I can’t exactly say anything for sure, but there’ve been talks.”

Stay tuned for more. Courtesy of WWE, below are two photos of Maxted working his 2017 WWE tryout. He has put on some size since then. 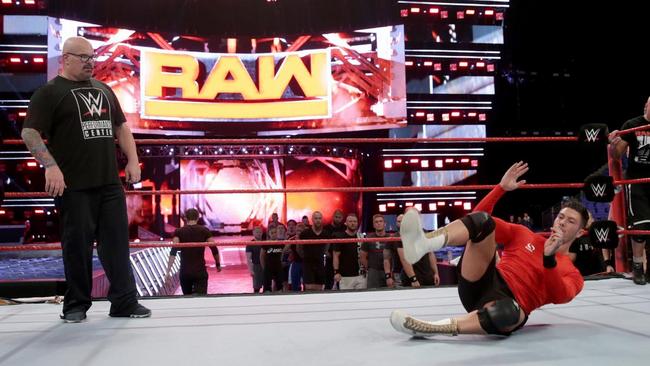 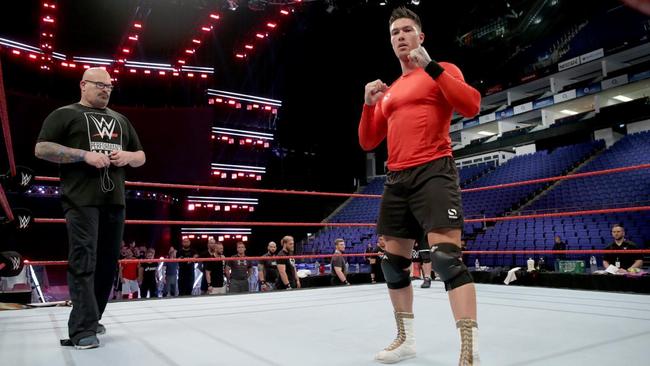